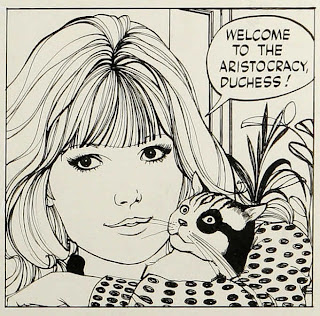 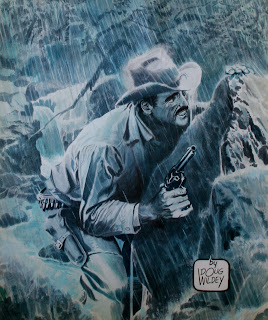 Posted by Dave Karlen at 6:26 PM No comments:

From his debut appearance in DC Comics' Showcase #17, archaeologist Adam Strange was used to being in difficult spots, but when fleeing from savages in a hostile South American jungle, he found himself struck by the transporting Zeta Beam sending him to the planet Rann. Little did they know that the first city of that alien world, Ranagar, initial attempt to communicate with humans unexpectedly brought them Earth's first interstellar spaceman! Strange quickly learned the language and customs from his beautiful girlfriend Alana, and her scientist-father Sardeth. Our hero soon becomes Rann's first citizen and savior protecting Rann from all types of alien invasions... often using some bizarre weapons like huge magnifying glasses to burn their futuristic cities, or weird space vacuums to suck up their inhabitants. From natural disasters to internal warfare, nothing was too complicated for Adam to solve with his quick analytical mind, flying rocket-pack, and handy ray gun. But despite Strange's love for Alana, he cannot remain on his adopted planet for long since the Zeta Beams effect soon wear off sending him back to Earth, where he must calculate when the next beam with strike, to be there for his next transport before it's gone. 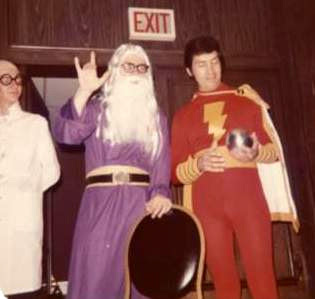 One illustrator I never had the pleasure of meeting was the ultimate fanzine artist who turned pro, Don Newton. After recently looking over a large collection of Rocket’s Blast Comic Collectors, I marveled at all the different Golden Age character drawings Newton produced in this, and other various fanzine he did in the sixties. Born in Pennsylvania, the Newton Family moved to Arizona when the budding cartoonist was a child to help with his chronic asthma. Years later, now teaching high school art classes in Phoenix and searching for old comics for his extensive collection, Don discovered comic fandom in its infancy and joined the Science Fiction and Comics Association, and started contributing artwork for all the fan publications.

These wonderful magazines sometimes provided reports about the big comic conventions, and Newton was often found as a guest of honor at these shows. Usually sporting his trademark Captain Marvel costume in their contests, he also contributed door prizes of his fantastic art to some lucky winners. Aside from the many Batman, Captain Marvel, Blue Beetle, Captain America, Hawkman, Tarzan and other sketches featured in Rocket's Blast Comic Collector, Don improved his growing artistic skills on an exciting adventure strip entitled The Savage Earth which ran for over a year till its climatic ending.

But while still active in the fanzine market, Newton never stopped trying to jump into the "Big Leagues" at Marvel and DC Comics. Unfortunately the companies at that time preferred their staff to be in the vicinity of New York, so Don settled for the lower wages and his first real break with Charlton Comics. His professional debut was in Ghost Manor #18 in 1974, and he continued to produce horror titles (though he didn’t care for the subject) over the next year until chosen to draw The Phantom, which is considered by many to be his best work at Charlton. His striking painted covers produced on The Phantom whose original pages were lavishly penciled and inked, are highly sought out by collectors around the world today, always bringing high prices!

Still active at Charlton, Newton tried to springboard his new professional experience to Marvel, where he did a smattering of issues and covers on The Defenders, Conan, and others, before landing at DC Comics. Working with his old friend and inker, Dan Adkins, Newton drew Aquaman, The New Gods, Star Hunters, World's Finest, and his best know work, Batman, which finally gave him enough financial support to quit his teaching job to be a full-time artist. But one of the illustrator's greatest goals was to draw his absolute favorite character, "The Big Red Cheese" himself, Captain Marvel. After studying under the original creator, C.C. Beck, who often appeared at comic shows with him, in early 1978 Newton was signed to draw Shazam! and the rest of the Marvel Family.

He completed some of his best work at National, before a better salary enticed Don back to Marvel Comics for more contract work, and a chance to draw another beloved character of his, Captain America. Since John Byrne did not want to give up that title, Newton was promised to illustrate The Avengers (starring Cap) with his favorite inker, Joseph Rubinstein, who he had worked with on The New Gods. However, with just a handful of issues under his belt, Don felt a bad choice of an inker on his pages, Dan Green, and sporadic work, motivated him to return to DC Comics, never to work for Marvel again. Newton continued his career drawing the Green Lantern Corps, which were well received and was slated to do the another Golden Age great, The All-Star Squadron in the new Infinity Inc. comic.

But even a body builder and known “health expert” couldn't survive a massive heart attack that left Newton in a coma that finally took the artist's life at the young age of forty-nine. Only a few stories were printed after his death including an All-Star issue that friend Joe Rubinstein took leave from Marvel to embellish for Don's last published work in Infinity Inc. #13, in 1985, a year after his untimely death.