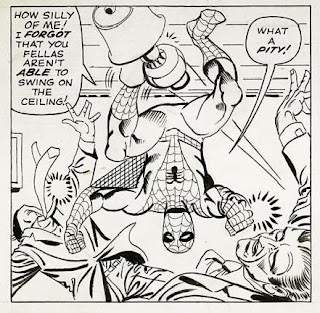 I really enjoy all types of comic art and love to recognize a "signature" shot of an artist. Ever notice certain drawings from your favorite comic illustrator that show up time and again. A particular angle or pose that occurs year after year that an artist uses in their visual storytelling process you can eventually love or hate to see again. It 's more that just an artist's look or style, but a pose that is unique to that creator, and once you've seen it, you know instantly who drew the work. What would I consider to be one of these "signatures", lets start off with Gil Kane. Kane had a lot of ways to tell a good graphic story, but how can you ever forget that specific angle he used so well, that "up the nose" view of a hero or villain you see over and over. Here is an example with the Vision from a Marvel Team-Up issue with not one, but two shots. But you could see the same view whether it be Batman, Conan, Peter Parker, Robin, Black Bolt, Green Lantern, or just about anybody else Kane wants to use it on. Usually it's in some sort of splash page with a montage of images including a floating head with the hero in turmoil and that astonished low camera angle looking up at them.

Or what about long-time Marvel workhorse Sal Buscema, and that certain way he tells a comic book tale? How many times have you seen that "open mouth scream" or maybe the "clenched teeth" like in the Incredible Hulk page featured here. Captain America, all the Spider-Man villains, most of the Defenders, and any other titles, ALWAYS have one of these shots, no matter when it was drawn. I've seen enough of these two poses to last a lifetime, but with comic artwork, it's fun all the same. Consider with me that Steve Ditko's "sock stars" are a "signature" of a kind that he used wonderfully in all those early Spider-Man books, but they show up in just about any issue Ditko illustrated when the heroes were slugging it out, whether you find it in Charlton's The Question, DC's Hawk and Dove, Creeper, or some of Marvel's pre-code mystery, sci-fi or horror books from the late fifties.

What about the talented Keith Giffin in his later works where he started using the "talking eye" technique or even the "talking lips" (which makes more sense) that can be found in any of his titles like, Hex, Justice, Dr. Fate, The Heckler, New Gods, Lobo, or numerous other books, just to name a few. Now he may not have invented this shot, but you sure enough know in the next issue he draws , he will be using them all again. But don't take my word for it, check out these "talking eyes" below in this Dr. Fate page.

When long-time DC artist Wayne Boring drew Superman coming in for a landing, you know what it would look like before I even mention it, he always has one leg extended (take your pick) and the other bent back at the knee, right? Well if Captain Marvel or Daredevil or even that strip character he illustrated, Davy Jones jumped off his boat and landed on the dock, I imagine it would look the very same, every single time. Fortunately, I like that one angle he used.

How about the one and only King of Comics, Jack Kirby! I'm sure he has too many "signature" shots to mention, since he practically invented modern comic storytelling by himself. I love to see that panel where the hero is charging in, lets say, Captain America, to a group of soldiers and there is one guy in the foreground looking back at the camera shouting something like "He can't be stopped!" Or what about when you get a blast of raw cosmic energy or some such thing that make that lovely "Kirby Krackle" energy form around a character. When you see the Fantastic Four, Silver Surfer, Thor, Kamandi, 2001: A Space Odyssey, or other sci-fi based books, you probably will catch some of that pure energy buzzing off the comic page.