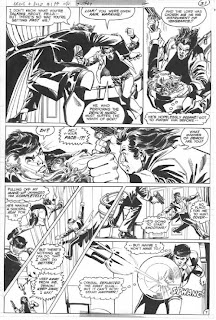 Now with two television incarnations, the first in 1992 on ABC starring Rick Springfield in the title role and the recent FOX program with actor Mark Valley, DC's The Human Target debuted in 1972 as a backup feature to Action Comics #419. Created by writer Lein Wein and artist Carmine Infantino, Christopher Chance is an Olympic level athlete, ultimate marksman, skilled martial artist, and master of disguise, making him the superior choice as a bodyguard for hire. Traumatized as a child by observing the death of his father, Chance vowed no one would ever suffer such fear again at the hands of an assailant, devoting all his special skills to take his client's place as "The Human Target". Chance is a master Thespian as well as the ultimate method actor, and unparalleled in impersonation and disguise, opening up a special private investigation agency to provide his security for a hefty price tag! Here are a few examples from those early Human Target stories with art by fan favorite artist Dick Giordano.