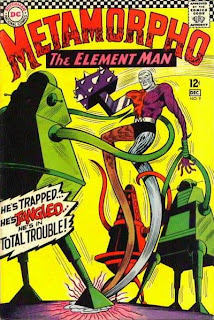 With his first appearance in The Brave and the Bold #57 in 1964, Metamorpho has endured the test of time as the "Element Man" being able to change his form into any chemical element present in the human body. The story starts out with a ruthless billionaire, Simon Stagg, who wants the famed Orb of Ra buried deep under an Egyptian pyramid. He hires adventurer Rex Mason to recover the fabulous treasure, but has him double-crossed at the last minute by one of Stagg's evil henchman. As our hero Rex was left for dead by his captors, he's mysteriously mutated by the mystic powers of the Orb of Ra, which transforms him into the freakish wonder Metamorpho. Now this "Element Man" seeks revenge on the villain Stagg, and with the help of his one true love, Sapphire, Stagg's only daughter, he find solace in his weird new transforming existence.