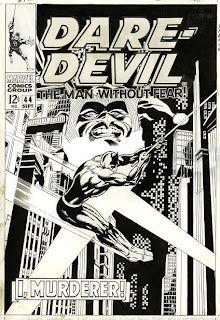 Matt Murdock was the son of boxer "Battling" Jack Murdock, and though of athletic build, he was a bookworm taunted by his peers with the nickname "Daredevil". One day Matt saved a blind man from being hit by a speeding truck, but was struck by a radioactive crate that had fallen from the vehicle that caused the boy to lose his sight, though his other senses were greatly enhanced. Desperate for his son to become a lawyer despite his injury, Jack decided to throw his last fateful fight to finance his son's education. But the night of the bout, Jack reneged on his promise once he saw young Matt in the crowd, which cost the boxer his life. Donning a black-and-yellow costume and adopting the name Daredevil, Matt sought to avenge his father's death against the crime syndicate and to serve justice after hours outside the court of law. Changing his costume to a red one-piece in issue #7, Daredevil's senses are so alert he can read a newspaper by touching the ink on a printed page, can hear a liar's false heartbeat, or know how many bullets are in gun just by its weight. With his radar sense and incredible strength this "Man Without Fear" has become one of Marvel Comics most enduring characters.