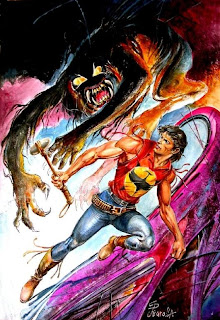 Created by writer Sergio Bonelli and artist Gallieno Ferri, Zagor first appeared in his own self-named title in 1961. An American Western hero of the 1830s, Patrick Wilding  was an orphan of an Indian raid that killed his parents as a child. Taken in by a friendly trapper called Wandering Fitzy, the lad grew strong  as he mastered the use of a fighting hatchet. Taking the Indian name of Za-Gor Te-Nay or Zagor for short, this "Spirit with the Hatchet" later trained with a traveling family of acrobats to better hone his skills into the avenger of justice that he is to become. With his trusty and amusing chubby side-kick, Don, our hero set up a fortress in Darkwood Forest to help fight for all oppressed men, no matter their color or creed. Not your typical Western feature, there is often a wild mix of science fiction and horror  that overshadow the adventure strip. An Italian comic with a world following, its popularity grew steadily in the former Yugoslav Republics, Austria, Turkey, Greece, Israel, and many other countries. Zagor's adventures are still being published today to a legion of new fans.