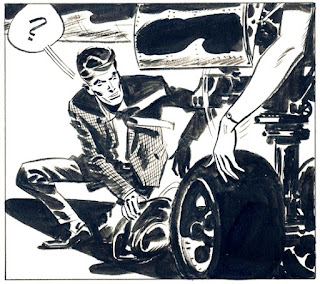 Born in Boston in 1917, Frank Robbins was a child prodigy who won an art scholarship at the age of nine. Having to forgo college due to the Great Depression, Frank drew for an advertisement firm handling illustrations for RKO Pictures. The artist also worked for Franklin Roosevelt's Works Progress Administration creating beautiful murals in the NBC building. Taking over the strip Scorch Smith from Noel Sickles in 1939, he found much success in the newspaper syndicate market. Asked to create his own aviation strip by King Features, Robbins created Johnny Hazard which debuted in 1944, heavily influenced by his main inspiration, Milton Caniff, which the creator wrote and drew until its cancellation in 1977. In the late 1960s when Robbin's income was shrinking due to his strips dwindling circulation, the artist worked a deal with Julie Schwartz at National Comics to write The Flash, Detective Comics, and Batman with his first story published in 1968. Having written for DC for four years, Robbins finally got the chance to showcase his unique art style in Detective Comics #416 in 1971 with the Caped Crusader taking on the dreaded Man-Bat. With most of DC's young fans being used to the realistic artwork of Irv Novick, Neal Adams, and Jim Aparo on the character, they had a hard time with Frank's loose line and exaggerated brushwork on Batman.

Even the president of National Comics, Carmine Infantino, did not care for his Batman drawings, but enjoyed the imaginative story lines the artist wrote, only editor Julie Schwartz backed and loved his moody dark style. Robbins drew various stories for Plop, Weird War Tales, The Shadow, House of Secrets, House of Mystery, and other titles before leaving DC for more appreciation at Marvel Comics. Asked to join the "House of Ideas" not for his excellent writing ability, but to illustrate a  number of their titles, Frank penciled, The Invaders, Captain America, Daredevil, The Man from Atlantis, What If?,  Ghost Rider, Adventures Into Fear, Powerman, and The Human Fly, just to name a few. Retiring from comics in 1979, Frank Robbins now concentrated on his fine art career being exhibited in various museums and galleries across the country before his passing in 1994 at the age of 77.