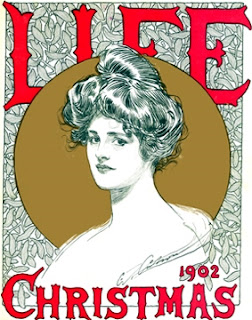 At the young age of twelve, Charles Dana Gibson was already getting rave reviews on his silhouettes in art shows, before he attended the Art Students league in his mid-teens and sold his first drawing to Life magazine at nineteen for four dollars in 1886. After some time in London and further studies at the Academic Julian in Paris, he returned to the States being offered extraordinary fees. As the magazine were fighting over his illustrations to be seen on their pages, Collier's Weekly signed the artist to a $100,000 contract for 100 drawings and also agreed to share him with Life. In this Golden Age of Illustration, Charles created for Life the "Gibson Girl" who ran in that publication for twenty years. One of the most famous of fictional characters of the day, this spirited beauty was the new image of womanhood whose fashion and hair styles became all the rage and a marketing phenomenon. A master of pen and ink, Gibson detailed pen point almost looked more like brushwork as he "painted" the elegant and high society types. Using his influence as President of the Society of Illustrators during WWI, he recruited top illustrators to design billboards and posters for the war effort. After a lifetime of success with the pen, he retired to paint in oil for the last fifteen years of his life.