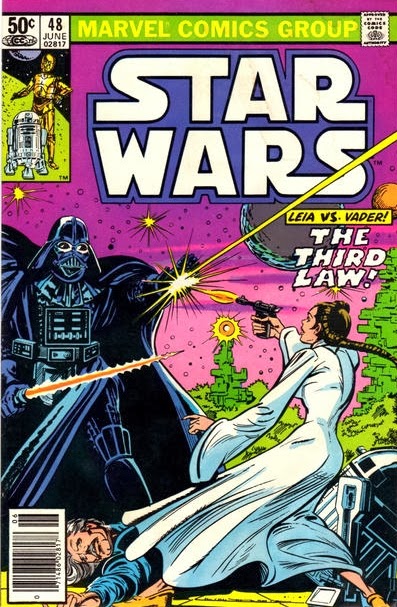 Lucasfilm's initially approached Marvel Comics in 1975 about publishing a Star Wars comic  prior to the film's release. However, Stan Lee declined to consider a proposal until the film was completed, and was only persuaded to a second meeting by Roy Thomas, who wanted to edit the series. Considering that movie tie-in's rarely sold well at the time, Lee negotiated a publishing arrangement with no royalties to Lucasfilm until sales exceeded 100,000 copies sold, and then legal arrangements would be revisited. So when Marvel launched Star Wars in July of 1977, two issues had hit the stands before the film premiered and was an instant smash hit for the "House of Ideas". It is said the comic's success saved Marvel financially from its first two years of sales. Considering it was one of their top sellers, they quickly exceeded the 100,000 limit, having Lucasfilm return to renegotiate their royalties from a  strong position.  Over its nine year run, it mostly produced original stories by some of their top artists, thought it also adapted the movies in their US and UK incarnations. One hundred seven issues and three annuals were produced before the series ended in 1986, only to be reborn by other publishers over the years fueled by he next motion picture and print exploits of the enduring heroic characters.