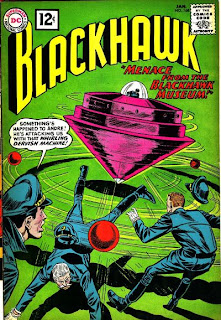 When you think of great "team" artists that drew comics with so many characters, who often comes to mind? You might like John Byrne on his wonderful X-Men run, or perhaps George Perez for his beloved New Teen Titans with all those heroes and villains that filled the comic pages. Maybe you’re a fan of John Buscema’s art on the Avengers, or Curt Swan for his Legion of Super Heroes work in the mid 1960s. But the one artist that had a real gift for producing those "team" books for DC was the underated comic genius, Dick Dillin. Richard Allen "Dick" Dillin was born on December 17, 1929 in Watertown, New York, and from an early age knew exactly what he wanted to be when he grew up. A comic book artist! Inspired from the great strip masters, Milton Caniff, Alex Raymond, and Hal Foster, young Dillin used to copy Prince Valiant panels to hone his skills on the one and only drawing board he ever owned. After graduating Waterford High School and a stint with the 8th Army Division in Japan, Dillin attended Syracuse University on the G.I. bill as an art student. Soon married and needing to support his new family, Dick pursued other work, but being bitten by the art bug, Dillin left his factory job for New York City. Dillin's artistic skill quickly landed some commercial and magazine illustration before achieving his goal of penciling stories for both Fawcett and Fiction House. His success on their features eventually lead Dick to the steps of Quality Comics where he illustrated romance, science fiction, horror, and war titles, until his big break as illustrator of his first "team" book, Blackhawk. Dillin worked at Quality Comics for five years, further developing his skills as a penciler before the untimely demise of the company and the unexpected sale to National Comics the rights to Blackhawk. Fortunately, when Dillin hit the streets of New York in search of work, DC was looking for him to continue his run on the popular title, which started his long and friendly relationship with National Periodical Publications.

After years of solid work on the Blackhawk, there was a change in direction at DC, and the title was canceled. Dillin was given a few issues of Batman, Hawkman, Green Lantern, Flash, and World’s Finest Comics, before landing on his best know work, DC’s ultimate "team" book, Justice League of America. Being initially worried about drawing all the super heroes together in every issue, Dillin quickly got over his hesitation and lasted a historic twelve years on the feature for a total of one hundred fifteen consecutive issues!

Dillin is fondly remembered today not only for his extensive run on Justice League of America, but by adding so many characters back into the DC mythos. He reintroduced to a new audience the likes of Red Tornado, Quality stars Plastic Man and Uncle Sam, Leading Comics’ Seven Soldiers of Victory, Black Canary, Hourman, Dr. Fate, Starman, Phantom Lady, Doll Man, The Ray, Black Condor, The Human-Bomb, Dr. Mid-Nite, Sandman, and other historic heroes and villains from the Golden Age. Doing some amazing detailed work, Dick never missed a deadline on JLA under the grueling pace to pencil the book. He even found time to do some back-up stories for other titles, such as the Atom features in Action Comics, Detective Comics’ Robin stories, and Superman’s Fabulous World of Krypton tales.

Always wanting to improve on his artistic talents, Dillin enjoyed many art forms. Whether doing painted portraits of family and friends, or animation storyboards for TV cartoons like Johnny Zero, The Mighty Hercules, and Johnny Cypher. Dick even produced modern fine art in the vein of Jackson Pollack. Unfortunately, a star that burns twice as bright -- lives half as long. So was the fate of Dick Dillin, who passed away at the young age of fifty while working on JLA #184 in 1980, after only completing the first two and a half pages of pencils. But he will always be remembered as the fun-loving artist with a room full of children, enjoying family and friends while creating the comics he loved so much.