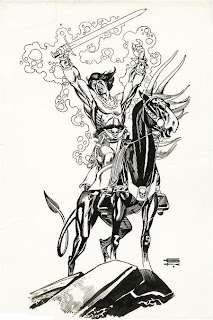 The National Cartoonist Society was created in 1946 when groups of professional cartoonists got together to entertain our troops. They soon found out that they enjoyed each other's company so much they decided to get together on a regular basis. Today, the NCS is the world's largest professional cartoon related group with over five hundred of the world's major cartoonists, working in all branches of the profession, including newspaper comic strips and panels, comic books, editorial cartoons, animation, gag cartoons, greeting cards, advertising, and magazine and book illustration, just to name a few. Past and present members have contributed to their NCS profiles of there many artistic achievements, and I thought I would start out with a Marvel and DC fan favorite, the late great Gil Kane who passed away in 2000. Winner of the Silver Plaque Award in 1977 for best story strip, Star Hawks, here is Gil's review in his own words.

Born in Riga, Latvia, on April 6,1925...Came to U.S.A. at age three. My creative attitudes shaped in part by the romantic fantasies prevalent in films...comics...pulp literature...big band jazz...etc. Started as a pro at sixteen...Service in the Pacific during World War II. For a while I worked with director Garason Kanin when he was involved in T.V...I created drawings which staged the action and composition for every foot of film. Published a magazine and developed and published an experimental paperback series with a character named Blackmark for Bantam books. At one point or another I've drawn virtually every major adventure strip character from Batman to Flash Gordon.

Have a wife Elaine, and three great kids, Scott, Beverly, Eric. We live in hilltop house in Wilton, Conn. Recently won NCS award for my work in comic books. My interests range...Theater, Ballet, Psychology, Literature, and I've just gotten into serious music. Ran NCS shoptalks, and am on Professional committee.