My Greatest Adventure: The Doom Patrol 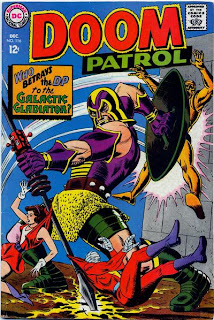 One of the wildest super teams to ever come from DC Comics, The Doom Patrol debuted in My Greatest Adventure #80 in the Summer of 1963 written by Arnold Drake and drawn by Bruno Premiani. Reborn out of disaster, strangers were offered another chance as fabulous superhero freaks, guided by a wheelchair-bound genius, Dr. Niles Caulder, AKA, The Chief. Actress Rita Dayton became the dynamic Elasti-Girl, being able to expand and contract her body like a gorgeous rubber band. Robotman was what's left of sportsman and race car driver Cliff Steele who's brain only survived a deadly auto crash. Larry Trainor, a jet test-pilot who flew through an atomic cloud created a radio-energy being separate from his body,The Negative Man, he can now control at will. Together with Steve Dayton, Rita's husband and one of the world's richest men, Steve can lift an elephant with just one thought wave as the mighty Mento. Scorned as freaks by the citizens they protect,The Doom Patrol use there super powers to fight bizarre menaces like the Brotherhood of Evil and Mr. 103, to save humanity from world domination.