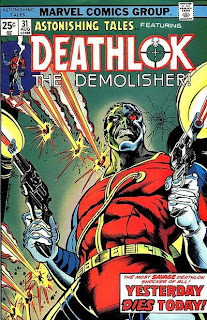 With his first appearance in Astonishing Tales #25, Deathlok the Demolisher was a Marvel series inspired by the cyborg craze of the 1970s written by Doug Moench and illustrated by Rich Buckler. Colonel Luther Manning was a tough American soldier from Detroit who after suffering a fatal injury on the battlefield, awoke as a reanimated experimental cyborg under the Deathlok Project in a post-apocalyptic future. A power hungry scientist named Simon Ryker rebuilt the warrior incorporating many new "improvements" including a symbiotic computer that communicated with Manning to often provide strategy in his numerous battles. With his enhanced mechanical and cybernetic  physiology, Deathlok now has superhuman strength and stamina as well as increased agility and reflexes. The cyborg's woven metal-mesh body suit and body armor incorporated on his right arm and half his scarred face made him a frightening opponent, coupled with his prior expert military training.  Equipped with a helium-neon laser pistol, standard issue for the U.S. Army of the future and a perfectly balanced throwing dagger, Deathlock skill as a killing machine lives up to his name in his many bloody conflict. Finally escaping from Ryker's control, Manning dreams of regaining his humanity and reuniting with his family, as he fights the military and corporate entities that have taken over the United States. Moench tight scripts have Deathlok fighting the War-Wolf, Ryker's Super-Tank and even his own clone drawn in Bucklers bold style over their initial twelve issue run. With many incarnations since its debuted, Deathlok still survives today in the Marvel Universe, ever waiting to be reborn once again.