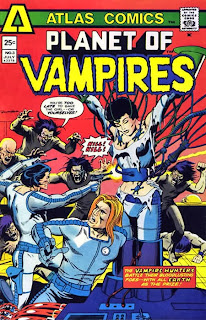 Another science fiction effort that lasted three issues with Atlas Comics was Planet of Vampires, under the creative team of writer Larry Hama, artist Pat Broderick, and inker Frank McLaughlin. A manned mission to Mars return to Earth after its five-year journey only to find they can't reach Mission Control so they land outside a devastated New York City. The team is instantly attacked by a savage gang of bikers who kill one of their crew before being rescued by one of the "dome" people on his floating aircraft. Taken back to meet the Protector at their dome headquarters, the astronauts soon learn that a nuclear war has destroyed the planet and society is now split in two factions, the technological "domies" and the savage hordes who now live outside. Grateful for the offer of protection from the barbarians, Captain Galland and his crew let down their guard, only to find out something is terribly wrong. The savages outside have developed an immunity to a plague that ravaged the land, and the only way for the dome people to survive is to extract a serum from drinking the blood of these outsiders. Fortunately, before our team is processed for the mutated "vampires", a captured biker helps them escape to lead the war against these advanced ghouls. As Russ Heath's superior art was added to help with the series, Neal Adams also did a fantastic cover to the second issue. However, over the next three tales the astronauts and their wives are killed off until only Captain Galland is left to fight alone on this planet of vampires.