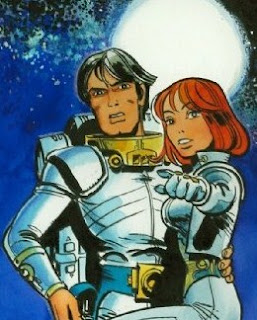 In November of 1967, Valerian, Spatio-Temporal Agent debuted in the popular French magazine Pilote #420 written by Pierre Christin and drawn by the delightful Jean-Claude Mezieres. In the year 2720 A.D. the people of Earth have extended their reign over the entire galaxy in which spaceman Valerian and his lovely female assistant, Laureline, are special Agents of the Terran Empire. An instant fan-favorite across France, Christin and Mezieres space-opera was full of cliff hanger thrills, rocket chases, numerous narrow escapes, and many bombastic battle scenes. Readers anxiously came back every issue to sample the snappy dialogue of the superior written scripts as well as the stellar scenery and lovely costumes of the beautiful secondary character. Even though no real super villains ever come to mind when remembering this inspiring and  inventive Valerian comic, it was still a beloved fast-paced feature that have been nicely reprinted by France's Editions Darguad.