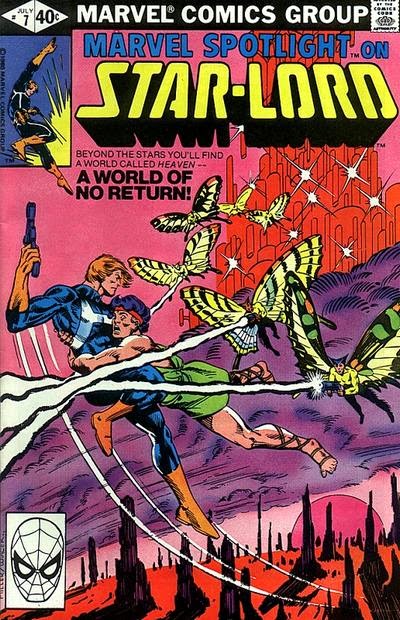 Marvel Comics Star-Lord first appeared in the black-and-white magazine publication Marvel Preview #4 for Jan of 1976. Created by writer Steve Englehart and artist Steve Gan, Peter Quill was the son of a human mother and alien father. Quill assumes the mantle of the Star-Lord, an interplanetary policeman, even though Englehart had plans for the character that went unrealized. He said later, "I conceived something very large. My hero would go from being an unpleasant, introverted jerk to the most cosmic being in the universe, and I would tie it into my then-new interest in astrology. After his earthbound beginning, his mind would be opened step by step, with a fast-action story on Mercury, a love story on Venus, a war story on Mars, and so on out to the edge of the solar system, and then beyond." But when the author left Marvel, Chris Clarmont revised the character comparing him to Robert A. Heinlein, and a threat of legal action by the science fiction writer. Teaming up with artist John Byrne and inker Terry Austin the character continued in Marvel Super Special, Marvel Premiere, Marvel Spotlight, and later with Michael Golden in Marvel Preview #11. Star-Lord appeared off and on in guest appearances over the years before being awarded his own series and is still alive in a recent incarnation from "The House of Ideas".