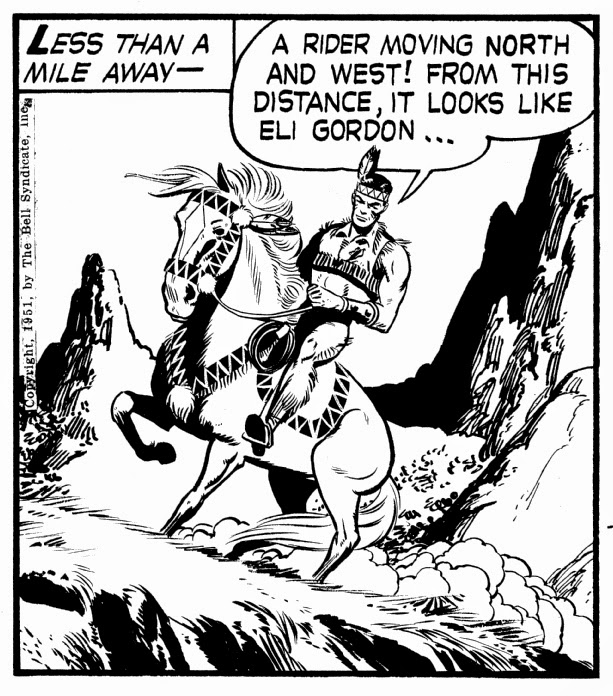 Riding on the popularity of movie and TV Westerns of the 1950s, the daily strip Straight Arrow debuted in 1954 and only lasted around a year but was published in many American newspapers. It was unusual to have a three-part deal to get the strip published, Nabisco owned the character, Magazine Enterprises produced the feature and the Bell Syndicate distributed the strip. Artists John Belfi and Joe Certa had been drawing the bi-monthly Western comic Durango Kid for Magazine Enterprises when they were teamed with their editor Ray Krank and writer Garner Fox to create the feature. But from the beginning, it was a difficult process. First to get the Enterprises editor and writer to create a plot synopsis that was then sent to Nabisco to see if the character was properly maintained. Next it went back to Enterprises to be broken down to more specific action before passed on to the Bronx studio of Joe Certa to draw the characters and John Belfi two miles away to pencil  the backgrounds. Then the strip was sent back to Enterprises to re-check and once again to Nabisco to re-check before Belfi inked the piece and send it to the Bell Syndicate for publication in the newspapers. But since the feature had plenty of action and adventure, it is well remembered by many a baby boomer even today.