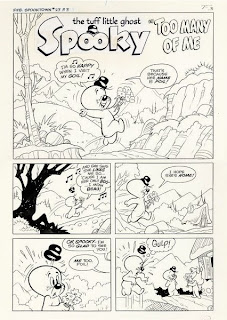 Howard Post was another National Cartoonist Society member who was a multi-talented artist that could draw whatever was called upon to do, animation, political , or comic book was all in a day's work for him. Here is his brief biography from a few years ago... I started cartooning at Paramount Studios in New York as an inbetweener. Twenty years later, I returned as a producer and director. Happy to say my cartoons are still running on Nickelodeon and elsewhere. Scripted and storyboarded scores more of animated cartoons for King Features, DePatie-Freleng, and Hanna-Barbera (dozens of Tom and Jerry's etc.) Wrote, drew and edited comics for D.C. , Warner, Harvey, and Marvel Comics. Lots of the popular Adventure and Bigfoot funny animal material. Ran a syndicated strip The Dropouts for sixteen years. I am currently writing and directing (storyboards) for television, while teaching various cartoon disciplines at School of Visual Arts. Two kids, two grand kids - so far.