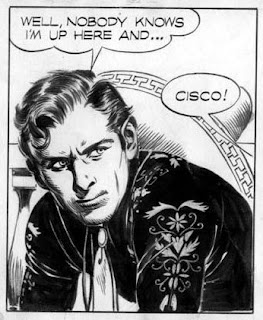 O. Henry's scoundrel from the short story "The Caballero's Way" was a well known property on stage and screen before King Features tried their hand at the beloved story cleaning up the Cisco Kid's image for a new daily that debuted on January 15, 1951. Rod Reed was chosen to write an updated adult type Western consisting of twelve to fourteen week episodes of action, adventure, intrigue, and even a little romance at times for our handsome hero! Argentinian illustrator Jose-Luis Salinas was asked to draft a dark, lean Cisco, with amusing plump foil side-kick Pancho, as well as beautiful women, mean villains, horses, and other enduring images of the wild West. When Jose arrived in New York from Buenos Aires he almost satisfied the editors on the first try, but succeeded with just a few minor changes to the character's jawline, making him a little tougher from his earlier drawings of a graceful and charming Latin lover.

This Mexican righter of wrongs instead of using California, had his thrilling adventures set in the New Mexico territories at the turn of the century. Fans and art collectors often remember best the impeccably dressed Cisco in his black embroidered shirt, with huge sombrero. Unfortunately from all the examples I've seen or owned, Salinas heavy use of zip-a-tone for shading effects (like on Pancho's one shirt) in this detailed feature have turned yellow over the years to stain most of these beautiful dailies. As well as being a supreme craftsman who could capture facial expressions, action scenes, backgrounds, and just about anything else he was called upon to do, Salinas was incredibly fast and could stay weeks ahead of his deadlines. Reed once told a story about how Salinas wanted to take a vacation to Europe with his family, so he turned out three months worth of strips over a fortnight with no visible difference in the quality so he could take time off to travel. Quite an accomplishment for any artist, but even more of a feat when all his scripts had to be translated into Spanish for the illustrator to draw.

Having only a daily version, the strip soon caught on and was quickly in over 150 papers, being distributed into at least ten languages to be shown in countries like, Norway, South Africa, Ireland, Germany, Scotland, Turkey, Holland, Yugoslavia, and Mexico, just to name a few. But after eighteen long years of adventures, containing some of the best story lines, greatest characters, and superlative artwork, the strip finally ended on August 5, 1968. Surviving probably the longest distance collaboration ever in comics, over 5000 miles from writer in New York to artist in Buenos Aires! It's too bad there never was a Sunday page, though the syndicate had considered one early on, I'm sure it would have been as spectacular as the other daily episodes this dynamic team created.

Thanks for the education - I didn't know much about Salinas, though I haev always admired his work on this strip. Coincidentally, I used to own the strip he is holding in the photo!

Tony, that's a great story, wish I had more of these gems as well.