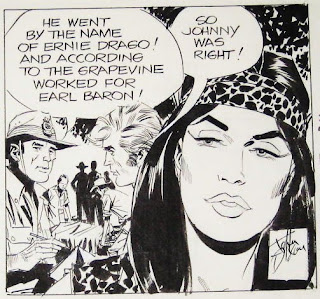 The aircraft, people, wildlife, and landscapes, especially in describing the world's oldest inhabitants, the Aborigines, were all displayed with equal care and authenticity by the keen eye of this creator. Dixon, a good pilot in his own right, made this feature the ultimate aviation strip, a realistically drawn adventure for readers to experience the far-off exotic locals of Australia. Inspired by the "big three" of comic art, Alex Raymond, Hal Foster, and Milt Caniff, Dixon leaned more to the "Caniff School" in his drafting, but was also equally impressed with contemporary artist Stanley Pitt's expressive figure work. John was also blessed to be an exceptional script writer, who could easily handle any facet of producing a high quality strip. With the assistance of his wife, Eleanor, who acted as his part-time secretary, Dixon enjoyed a wonderful studio perched high on a hillside of their home at Bugan Head Beach. This delightful view was enjoyed by many, as John was a great booster of Australian talent, giving a helping hand to any who asked. Mike Tabrett took over the Sunday once Dixon got the rights for a daily, and was also assisted by comic veteran Hart Amos under John's helpful guidance. These two talented artists, who also shared a love for authentic storytelling, helped further promote the strip until it eventually appeared in Hong Kong, South Africa, Ireland, Spain, Italy, Holland, Turkey, New Zealand, Germany, France, Sweden, Argentina, and the only American appearance in the historic Menomonee Falls Gazette.
Posted by Dave Karlen at 2:13 PM

Dave just thought I would comment on your Air Hawk blog...

Firstly, nice to see John mentioned, as he seems to have slipped off the radar (especially in eyes of modern Australian artists, cartoonists and fans), and is - in my opinion - still Australia's greatest adventure strip artist.

In correspondence with John he reports preferring "Air Hawk and the Flying Doctor" (singular "Doctor") as the strip's title.

The other matter is also a nit-pick in the scheme of things, but for historical accuracy I shall pass it on: the first appearance of the Sunday "Air Hawk" strip was on May 30 1959 in the Perth "Weekend Mail", not the Sydney paper you quoted. The seminal Australian Comic History Book "Panel by Panel" by the late John Ryan similarly and incorrectly lists the newspaper you quote. It was only when John Dixon sent me a photocopy of the original newspaper strip earlier this year (2009) that I learnt the true facts.

Incidently, I am in the mid-stage of publishing a trade paperback of John's "Air Hawk and the Flying Doctor" at present, with the cover to be illustrated by Eddie Campbell. (Remember you heard it here first, folks, on Dave Karlen's Blog....)

Nat, thanks for your comments and corrections. I look forward to seeing this wonderful strip in print again. Good luck on your upcoming publication.

Just to let you and your Original Art Blog Readers know that the 200-page book "John Dixon, Air Hawk and the Flying Doctor" is available to be pre-ordered at Special "Mates Rates". Simply check out the COMICOZ web-site: http://comicoz.weebly.com