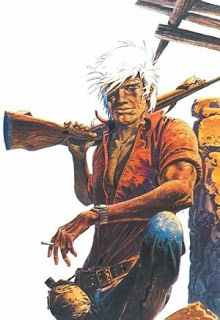 Created for the Belgian weekly magazine Tintin in February of 1966, Bernard Prince was written by Michel Regnier and illustrated by artist Hermann Huppen. A former Interpol agent turned soldier of fortune and journeyman, Bernard Prince traveled the world on various adventures aboard his yacht "The Cormorant" with his trusted stalwart crew. Accompanied by the hairy hard-drinking Barney Jordan, and his teen-aged sidekick Djinn, this unlikely trio traveled from the deserts of Central Asia, to the jungles of Amazonia, and the mean streets of Manhattan Island. Set in the classic adventure strip tradition, this thrilling feature introduced many memorable over the top villains such as the international criminal mastermind, Kurt Bronzen, or the bloodthirsty General Satan, captain of a band of assassins. Hermann's illustrations were simply electrifying, done in his bold powerful style from Regnier's dynamic whirlwind scripts. With plenty of gun play and exciting chases, the strip was reprinted in numerous volumes of Editions du Lombard and the American magazine Wonderworld.