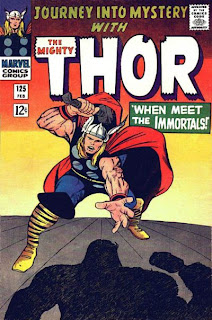 With his first appearance in Journey into Mystery #83 in August 1962, The Mighty Thor has endured these last forty eight years as one of Marvel's most popular characters both in his own magazine and as a member of The Avengers. Fascinated with the deities of Norse mythology, artist Jack Kirby and writer Stan Lee created this god-hero early in Marvel Comics renaissance filled with noble warriors, fierce ice giants, crafty trolls, and fire-breathing dragons. The story surrounded a frail doctor named Donald Blake who while vacationing on the Norwegian coast found an ancient wooden staff in a hidden cave. After striking a bolder with the walking stick it changed into the enchanted hammer Mjolnir, as the spindly physician transformed into the golden-haired "God of Thunder" in full Norse battle garb with winged helmet.

Over the many yarns Lee spun, he added a huge cast of supporting characters including the evil half-brother Loki, Balder the Brave, The Lovely Sif, High-Father Odin, Heimdall, Volstagg, and many other memorable nefarious villains and stalwart heroes. Written with Stan's colorful neo-Shakespearean dialogue and illustrated with Kirby's majestic cosmic images, the series thrived for years, even overcoming the departure of Jack in 1970 and Stan in 1972. John Buscema was chosen from Marvel's bullpen to take over the art chores, with Roy Thomas writing the scripts, which continued the popularity of these mighty Asgardians for years to come. As a legion of other talented creators worked on the series over the past decades, all helped prepare The Mighty Thor for its major motion picture debut to hit the silver screens in the very near future.