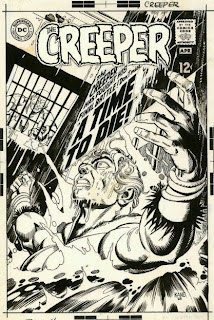 DC Comics Showcase #73 from April 1968 introduced one of the most bizarre characters to come from comic genius Steve Ditko, his strange anti-hero called The Creeper. Jack Ryder was a network security agent, a type of TV reporter with a badge, who was trying to track down a brilliant scientist who was about to be kidnapped by communist spies. At a wild costume party disguised in colorful attire, Ryder discovered a professor who gave him an instant-healing serum, that also provided super strength and other powers before the scientist was suddenly shot dead by an enemy agent. With the help of his new powers, The Creeper tracks down criminals with his reckless mad behaviour and maniacal laugh that chills to the bone every crook that inhabits the underworld. Misunderstood by the police, our weird avenger fights villains such as the blank faced Proteus, and other uncanny Ditko rogues that were way ahead of there time for most 1960s National Comics readers. After his try-out and a short six issue run, The Creeper was not heard of until the middle of the 1970s when he showed up in various Batman related titles, which brought the character before a new generation of fans and a new found popularity that spawned series being printed even today.