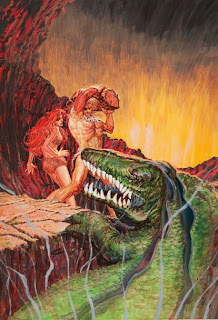 When Don Glut got the chance to write for Western Publications in the early 1970s, one of his first stories he produced was a rejected idea he had for Jim Warren about a caveman encountering the world's first werewolf.  Appearing in Gold Key's Mystery Comic Digest #3, "Cry of the Dire Wolf" introduced Tragg and his lovely mate, Lorn fighting both saurians and the supernatural in a thrilling tale drawn by Filipino great, Jesse Santos. Another appearance followed the next year in the same anthology title, but editor Del Connell didn't want another dinosaur book since they already had great success with both Turok, and Tarzan. However in 1975, Erich Van Daniken's books were suddenly all the rage, Western wanted to develop a alien book in the same vein, so Tragg and the Sky Gods debuted in June of 1975. A strong mixture of science fiction and Stone Age action, the story revolved around the space aliens (Sky Gods) whose experiments on a prehistoric couple (Tragg and Lorn) creating the first Cro-magnons who eventually lead their Neanderthal brothers in revolt against the alien race. Lasting just twelve short issues in various anthology books and his own title, Santos commitments to other projects left the pencilling chores to Dan Spiegle, though Jesse still did the fantastic painted covers for the series.