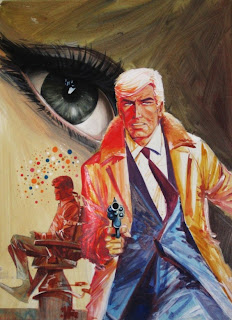 Offered here is another one of the many fantastic strips to come from Belgium and a personal favorite of mine. Created by writer Michel Regnier and artist William Vance, Bruno Brazil first appeared in a 1967 issue of Belgium's weekly magazine, Tintin. A strip spawned by the spy craze, it was a rough mixture of Mission: Impossible and the The Dirty Dozen. Bruno Brazil is the leader of a motley crew of mercenaries known as the "Cayman Commandos" who takes on special espionage missions around the globe. Along with main characters "Gaucho" Morales and the lovely lash-wielding heroine called the "Whip", Bruno drives his unsavory team to the limit on every adventure, whether fighting Mafia Chieftains, counterspies, or island dictators. Regnier dynamic scripts and Vance's lush illustrations packed these tales with exciting characters, exotic locals, lots of violence and a break-neck pace that always made the feature a suspenseful thrill ride with a loyal fan following even today.