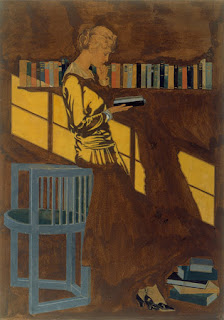 Coles Phillips was born in Springfield, Ohio and attended Kenyon College where his first illustrations appeared in the school's newspaper and yearbook. Wanting to pursue his art career, he left for New York in his Junior year taking a series of part-time jobs and night classes at Chase School of Art. His skill as a sketch artist won him numerous advertising jobs, and he soon started his own agency in 1906, but left it to free-lance once again desiring the artistic side over running a business. When the editors of Life asked him to come up with a new concept for their covers, his famous "Fade-away Girl" was born. Best know for this unique design, Phillips would tie the figures in his pictures into the background by using either a color, value or pattern. This left the viewer to fill in the missing parts by using their own imagination as Coles carefully designed these crafted images. This device was an instant success that lasted for over twenty years on the covers of  Collier's, Liberty, Good House Keeping ,Vogue, and The Saturday Evening Post. Sought after by all the major publications of the day, Phillips take on beautiful women with their delicate lines and beautiful features made him a very busy illustrator. However, in the early 1920s the artist had developed a serious kidney disease and travelled abroad seeking a cure from European specialists, but none was to be found as Phillips passed away at the young age of forty-seven in 1927.