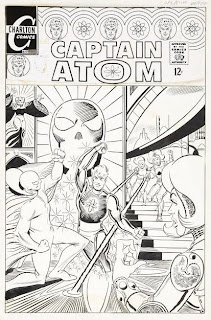 The first Charlton superhero creation by artist Steve Ditko, Captain Atom, debuted in Space Adventures #33 in 1960 for a successful thirty-three issue run. A United States Air Force officer, Captain Nathaniel Adam, was offered a bitter deal after being convicted of treason. To spare his life, he was to join a top-secret nuclear research project. Wrapped in a cocoon of alien metal, placed on top of an H-bomb and detonated, our hero seemed by all accounts to be instantly vaporised. However, what actually occurred was a totally new Adam was created and transported some twenty years into the future. While the real Nathan Adam was left stranded in a void, this new creation enlisted in the military and was given the alter ego of Cameron Scott, to protect his identity as Captain Atom. The alien alloy that coated his body made our hero have the ability to fly, super strength, fire atomic blasts, and even absorb nuclear energy, though it would often cause a quantum leap into the future. Fighting his arch-enemy called Monarch,(the real Nathan Adam who somehow escaped the void), Captain Atom has been entertaining readers for many years at Charlton and later DC Comics, after they purchased the rights to all the comic company's popular stable of characters.