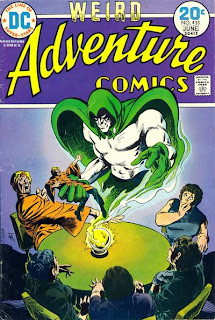 With his debut in the Golden Age of comics appearing in More Fun Comics #52, 1945, the Spectre is one of the longest lasting of DC characters with thrilling adventures over the past sixty years. When police detective Jim Corrigan and his fiancee Claire Wilson were captured by local crime boss, "Gat" Benson, Jim was quickly knocked unconscious, placed in a barrel of cement, and dumped into a raging river. Corrigan's deceased spirit, now in a black void was traveling towards a light, but unexpectedly prevented to reach its goal. A Voice told Corrigan's spirit that his mission on Earth was not yet finished and had to return to fight evil with the supernatural powers he now possessed. As the dreaded Spectre, he confronted Benson, driving him mad, and overcame his thugs to rescue his beloved Claire. Since only Benson and his gang knew of his death, Corrigan returned to the police force, animating his body once again for his daily work as a detective. But as night falls, Corrigan unleashes his avenging spirit on the evil and wicked of his adopted city of New York. Provided with almost unlimited supernatural powers, the Spectre is capable of virtually any feat in his relentless fight against crime.