Leonard Starr...In His Own Words 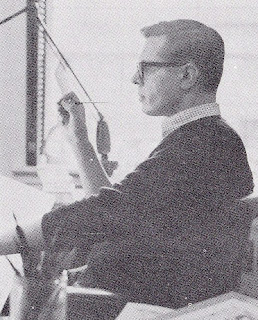 What art training I had, I received at the High School of Music and Art in New York City, my home town, and Pratt Institute. I think, however, it's accurate to say that most of the knowledge I now have I acquired on my own. It's the hard way, and I don't recommend it. You find yourself struggling with basics that should be be second nature, and the backing and filling involved is a deplorable waste of time. I would have preferred a full academic background in the old tradition.Up until the time I began On Stage I did advertising and editorial illustration, and ghosted several comic strips. Fortunately, I have friends in different areas of show business, so I was able to enlist their assistance in matters of story material and accuracy when I started to draw On Stage. Show business gossip has been a valuable source of material, and most of my stories have their basis in actual incidents and personalities.

When I use an actual person, which is quite often, I have them pose for the situations in which they will appear. I enjoy this, for in addition to the realism thus gained, it gives me practice in achieving likenesses in different angles and expressions. To avoid having characters look too much like one another, especially those in the same episode, I try to make certain that they all have different head shapes, and that the hair mass on each is distinct. One of the major frustrations is the process of reproductions of art work. This varies so much, and the quality is so inconsistent, that it's almost impossible to tell how much detail and refinement of technique one should use. Even with luck, the reader rarely sees anything close the original drawing, and I don't know any way to combat this. Like most cartoonist I know, I aim for the middle, and hope for the best.

I use 3-ply paper and India ink, and since I ink almost entirely with a brush, it is thinned considerably with distilled water for easier flow. Because of this the ink won't stand much erasure, so I draw with a 7H pencil, which is light in tone but leaves a strong impression. Then I erase the pencil drawing with kneaded erasure, lighting the impression still further, but leaving a drawing clear enough to ink. This, then, precludes the necessity of erasing the finished ink drawing at all. My assistant, on the other hand, does terribly intricate background drawings with a old 104 penpoint, and ink that's barely liquid, that you couldn't erase with a sandblaster. I use a No. 3 brush for practically everything. I've always resisted switching tools once I'm "warmed up." I'm afraid it will break the trance-like state that I find necessary to produce large quantities of work under deadline conditions.

Gorgeous article, superb insight... without too much elaborating on the details, we're able to comprehend the complexity of the comic strip creative process the way it should be understood.
More articles like this are sorely needed, nevertheless...

Thank you for your kind words, I will have more of these articles on comic creators in the near future.