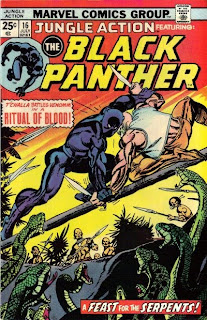 An African king who also acts as a part time superhero, the Black Panther was introduced by the team of Stan Lee and Jack Kirby as a minor character in Marvel Comics Fantastic Four #52 in July of 1966. After a few issues, the jungle lord was not seen until he resurfaced as a new member of The Avengers with issue #52 in late 1968. With the success of these try-out books, T'Challa got his own title starting in the sixth issue of Jungle Action in 1973 with excellent scripts by Don McGregor and powerful artwork by artist Rich Buckler. Later, one of the few black artist's in comics, Billy Graham, finished out the introductory series with remarkable energy and surprising serious story lines as the King of Wakanda spent half his adventures between Africa and America. Jack "King" Kirby returned to his creation in the late seventies for a two year run done in his unique classic style, before Marvel decided to relaunched the Black Panther once again in the eighties as a darker, grittier character with policeman Kevin Cole donning a bullet-proof costume he found in an alley to fight crime as a ruthless vigilante outside the realm of the law.