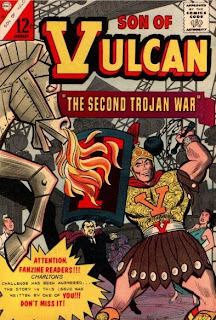 With his first appearance in Charlton Comics Mysteries of Unexplored Worlds #46 in May of 1965, Son of Vulcan, was one of the company's most unusual short-lived heroes. Johnny Mann was a newspaper reporter for Worldwide News sent to cover a civil war on the Greek island of Crete. Exploring the ruins of the Hall of Jupiter, Johnny pondered why the gods would allow such war and killing and was instantly transported via a thunderbolt to Mount Olympus. Confronting the Olympians with his question, they replied that since the gods did not create man's evil they would not deal with it. Vulcan was the only deity to defend Mann and decided to provide his assistance in weapons and curing Johnny's crippling war injury. Now as the Son of Vulcan, our Greek hero has the sword of Ulysses, mace of Vulcan, and other mystical powers of the gods, like controlling fire and the elements to fight the many evils on Earth.