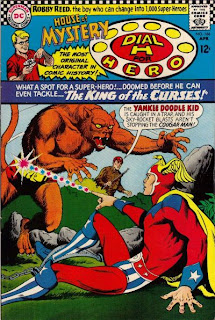 After stumbling into a hidden cave, Robby Reed discovered a strange dial from another dimension that had weird inscriptions carved on its surface. After studying the device in his private lab at home, the school boy found that dialing the translated letters H-E-R-O changed him into one of a thousand different super beings. Billed as the most original character's in comic history, Dial H For Hero, debuted in DC's House of Mystery #156 in January 1966. Written by Dave Wood and illustrated by Jim Mooney, this short-lived adventure series initially lasted only two years, but had some of the wildest story lines in comic's as Reed's fantastic secret created three new heroes every issue. The only problem the boy faced though was Robby never knew which hero he was to become or what powers he would possess. The Hoopster, Human Starfish, Giantboy, and The Squid were just a few of the colorful characters Robby dialed up ever month with his signature saying, "Sockamagee!".