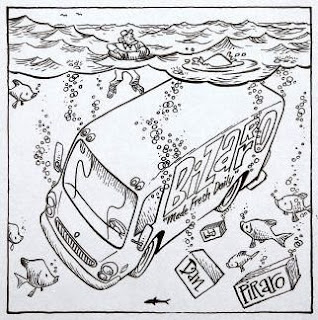 Posted by Dave Karlen at 3:11 PM No comments: 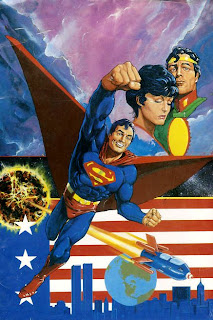 Posted by Dave Karlen at 6:07 PM No comments: 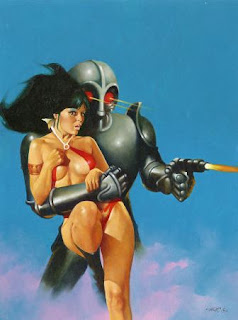 Everyone enjoys a good scare now and them, and that goes for collecting original art from the scores of horror titles that have been with us for over sixty years! My earliest pages in collecting originals came from those wonderful DC horror anthology books that were popular in the seventies by some Filipino artists that really set the mood in those twisted tales. I always enjoyed collecting horror memorabilia whether it be comics, movie posters, or other paper items. But one fateful day I discovered a stack of original horror art at a local comic convention. I was instantly hooked on this one-of-a-kind collectible, which seemed to me to be the best kept secret in comic fandom -- obtaining the art itself.

In the 1940s a few brave publishers experimented with horror subjects in the starring role like Prize Comics' Frankenstein and Hillman's bush creature, The Heap, (which eventually inspired both the Incredible Hulk and Swamp Thing many years later), but Avon's one shot comic Eerie from 1946 is debatably the first true "horror" book. Seeing profits in this budding new genre, other comic companies quickly followed suit developing a host of creepy and crawly characters to scare many kid right out of their socks for years to come.

However, the real explosion in fright comics came from William Gaines EC Comics line. His trio of horror titles, Tales of the Crypt, The Haunt of Fear, and The Vault of Horror debuted in 1950 and really started the ball (or head) rolling! Following the lead from the strange late night radio shows hosts of the time, these anthology books were introduced by weird supernatural narrators such as the Crypt-Keeper, the Old Witch, and the Vault-Keeper. Most collectors will agree that EC produced the best comic art of all time rendered by the likes of Wood, Severin, Ingels, Davis, Feldstein, Ingels, Crandall, Kurtzman and many others, who collectively started the most successful horror craze in comic history.

When other publishers couldn't compete with the superior artwork, story, and black humor of the EC books, they tried everything they could to make a difference by using excessive gore, violence, and other shocking effects to try to produce better sales. This trend, coupled with Dr. Fredric Wertham's attack on comics in his 1954 book, Seduction of the Innocent, helped fuel a U.S. Senate investigation into comic books and their alleged connection tothe growing juvenile delinquency in the country.

All the comic publishers quickly realized the ramifications of this modern day "witch hunt" and developed the Comics Code Authority Seal of Approval to better help police their own industry. Though the original investigation was focused more on the very popular and violent crime comics, it also took a heavy toll on the horror genre as well, stopping any references to zombies, vampires, ghouls, werewolves, and other classic horror characters. The Code even banned the words "terror" and "horror" from any comic book title, which effectually killed off all the booming fear books of the day.

But you can't keep a good genre down, so spook comics did bounce back in the early 1960s with Atlas Comics' Lee and Kirby stories of space born "big foot monsters" attacking mankind, following closely the science fiction creature features of the time. There still were a few watered-down horror titles hanging around, including Ghost Stories from Dell and Gold Key's Twilight Zone that still made decent sales. When the Code restrictions were revised in late 1971, National, Marvel, and Charlton launched loads of gritty new titles bringing back all the ghouls and goblins that were so missed by the fans. Many publishers even developed their own wicked legion of narrators as modern day "horror hosts" to present their scary new storylines. A favorite of mine were Uncle Creepy, Cousin Eerie, and the beautiful blood-sucker from Draculon, Vampirella, from Warren's excellent collection of books. Launched in 1965 James Warren's graphic black-and-white horror titles luckily escaped the Comics Code since they were carefully issued in the larger magazine format to avoid any censorship.

If EC was the high point of the Golden Age of horror comics, most would agree that Warren's fantastic collection of artists and writers from around the world created the finest terror tales of the Silver Age. Bringing back many of the original EC creators, Warren also tapped new talent from Spain (Maroto, Aureleon, Gonzales, Torrents, Ortiz, Sanjulian) and the Philippines (Nino, Cruz, Alcala, Nebres). But even now, renowned authors like Stephen King and Clive Barker have made their mark with recent developments in modern horror comics, though today it's a small share of the market when compared to the "gory days" of the past.

Posted by Dave Karlen at 3:00 PM No comments: 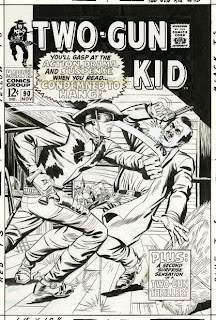 Posted by Dave Karlen at 1:30 PM No comments: