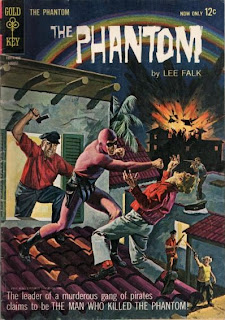 Thanks for posting these! Wilson was an absolute genius. Been looking for a nice Mighty Samson cover for years.

Where does the SF second panel come from after Turok? I don't recognize it? Thanks, you got a nice blog here, just found it.

That cover is from Space Family Robinson #5 for December 1963.

Mr. Jusko, thanks for your comment. We are crazy about your work as well, especially the Tarzan!

Thanks for the background. About 20 years ago, I lucked into four of his Gold Key cover paintings: Tarzan 206, Solar 22, Boris Karloff 6 and Twilight Zone 26. Since I'm a comic nerd from way back--my brother and I used to love the digest-sized Gold Key collections in the 70s--I recognized the style. I'd never sell them, but did want to learn more about the artist. Thanks again for the story.

Wow Scott. Super nice pieces. Have you ever thought about putting them up on the Comic Art Fans sight? I am sure everyone would love to see them. Especially the Twilight Zone 26, which I believe is actually really the four color 1288 issue. Aren't those Mystery Comics Digests the best?!

Discovered Wilson when I came across a King Kong comic book cover.