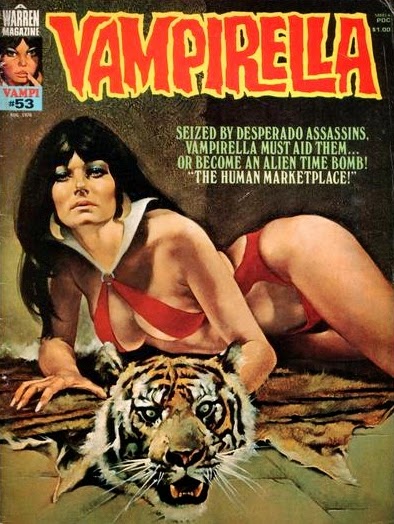 Created by Forrest J Ackerman and costume/hair designer Trina Robbins in Warren Publishing's black-and-white horror comics magazine Vampirella #1 for September of 1969, Vampi, started as a horror-story hostess, before becoming  a horror-drama leading lady. First drawn by Tom Sutton and a painted cover by Frank Frazetta, Jose Gonzales became the character's primary artist which soon became a fan favorite. Vampirella was a lovely inhabitant of the planet Drakulon, a world where a vampiric race lived on blood as it flowed in their rivers. The planets twin suns were causing severe droughts across the planet, marking certain doom for her Vampiri race. These strange creatures were able to transform themselves into bats at will, possessed superhuman physical attributes, sprout wings when required to fly, and of course drink blood. Our story begins with Drakulon's last inhabitants are dying when and Earth ship crashes onto their planet and Vampirella is sent to investigate. The sexy vampire soon finds out the astronauts have blood in their veins, takes over the ship and returns back to Earth where her adventures really begin. With her interesting supporting cast of characters, our heroine now becomes a "good" vampire, and devotes her energy to ridding our world of the evil kind of blood suckers.
﻿ 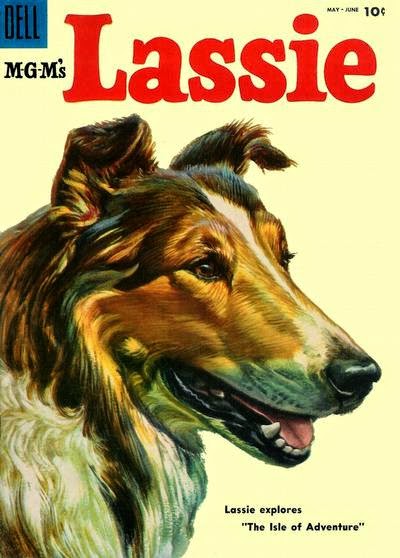 From the late 1940s through 1970, Dell Comics published a bimonthly Lassie comic to continue the adventures of MGM's favorite canine star. Since the Lassie movies had no running storyline,  Dell decided to invented one for her. The feature began set in the Brazilian jungle, the "Matto Grosso," with Lassie's human companions Gerry and Rocky, two American journalists who owned a ranch who wrote and photographed South American historic locations for publication. Timbu of the Taquari Indian rounded out their little cast of characters as they traveled to Peru, Argentina, Venezuela, and even to New York on occasion. Well written scripts gave bits of knowledge  about the habitats of native animals, plant life, and history, in our collie's travelogue. With fantastic painted covers by Morris Gollub and Matt Baker interior art, Lassie was usually featured saving her human companions, or other dangerous and often charming covers with Brazilian flair. In 1956 though, Dell decided to change the comic to be current with the TV show and sent Lassie to live with friends in Calverton, after discovering a life-threatening allergy to a certain grass found only in the Matto Grosso! From then on, Jeff and Timmy were Lassie's loyal masters as the storyline followed the television series and became wholesome morality plays with lessons on friendship or safety. Photo covers now replaced the painted gems as the series progressed to the Corey Stuart adventures until the comic ended in 1970 of America's most beloved collie.
﻿

Posted by Dave Karlen at 9:15 AM No comments: 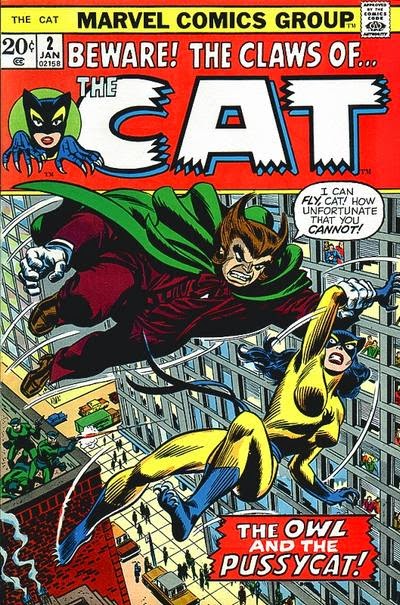 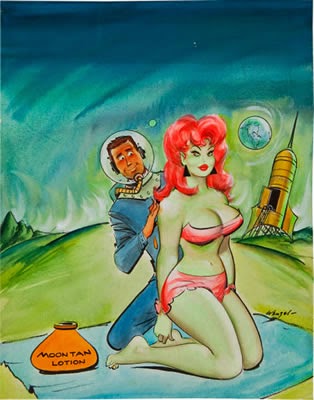 Born in January of 1918, William Michael Wenzel was an American cartoonist best known for his lovely renditions of good girl art for various men's magazines. As one of the most prolific pin-up artists of the day, He illustrated for Humorama in the 1950's and 60's where he did some of his best work and was known for his Maryln Monroe-esque women. The cartoons he drew for Humorama were all done in ink wash or Conte Crayon or a combination and were truly full illustrations. Published by Martin Goodman, the original Marvel Comics publisher, Humorama, along with its many sister publications, ran for over 30 years and featured among other things, single panel gag cartoons by some of the best girlie artists of the day including Bill Ward, Jefferson Machamer, Reamer Keller, and Dan Decarlo. Bill's bawdy, cartoon spot illustrations were published over the course of several decades, from such publications as Judge in the 1940s to Sex and Sexy in the 1960s and 1970s, and particularly for the Humorama division of publisher Goodman's variously titled corporations. Wenzel's work, which featured voluptuous, big-eyed, yet innocently risque young women, was published in such magazines and digests as Gaze, Joker, Jest, Comedy, and Stare. Most captions were written by the artist himself. In 1979, after having lived almost three decades in Atlantic Highlands, New Jersey, Wenzel and his family moved to Naples, Florida, where he died in January of 1987 of lung cancer.
.