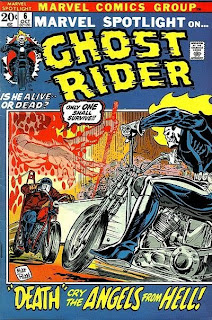 It is easy to see when Pat Boyette enjoyed the subject matter of a story he was illustrating, especially since he was fascinated with Lee Falk's world famous jungle hero, The Phantom, the original "Ghost who Walks". Never wanting to draw muscle bound costumed superheros, Pat liked to do tales of a ordinary man without super human abilities up against incredible odds, men like Blackhawk, Jungle Jim, and other various war, Western, or adventure characters. Boyette had already worked in television, radio, and film, before turning his sights on comics, and as shown here, has really pulls out all the stops with his excessive detail and backgrounds including his "scratch effect" for the rainstorms in this delightful jungle yarn from Charlton Comics, The Phantom #43 from 1971 as shown in this story entitled... 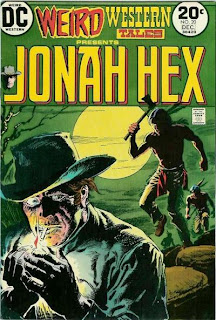 Posted by Dave Karlen at 8:29 PM No comments: 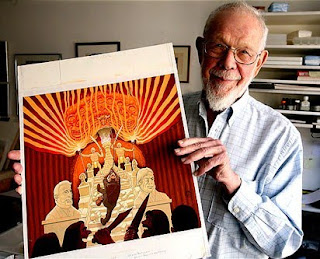 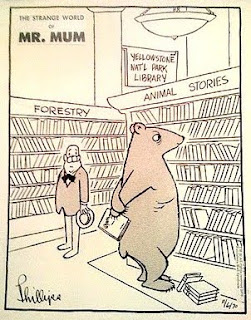 Based on a stage play created by Phillips for Broadway, The Strange World of Mr. Mum debuted on May 5, 1958, with its whimsical iconic style that helped pave the way for other one panel cartoonist with off-beat humor like Gary Larson's, The Far Side, or Dan Pirraro's, Bizarro. Our man on the street, Mr. Mum, was a good-humored, befuddled gentleman who somehow always came across one zany situation after another with his tragic deadpan expression. If ever shaken to his core from these outer limits type weird happenings, the most we ever saw out of this silent bystander was an occasional raised eyebrow. At the peak of its run, starting with the Hall Syndicate and later ending with the Field Newspaper Syndicate, it graced 180 newspapers, spawned a Sunday page in 1961, and was printed in 22 countries...no translation required.

Whether it was a single mother with a brood of children shooting a stork at the local zoo, or a caveman returning several overdue stone tablets to a amused librarian, Mr. Mum somehow remained stable at what he observed. This signature strip won Irving Philips the International First Prize and Cup of the Salone dell' Umorismo of Bordighera, Italy, in 1969. Two books, ten years apart were published about Mr. Mum's exploits, but often appealing to only a narrow section of newspaper readers, until the series eventually ended in 1974 despite protests of his many loyal fans.

Posted by Dave Karlen at 6:27 PM No comments: