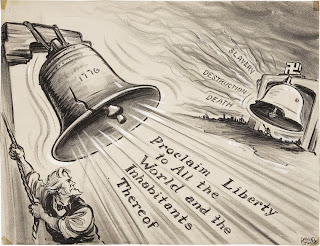 Modern editorial cartoon, also know as a political cartoon, is an illustration containing a commentary that usually relates to current events or personalities. Editorial cartoonist typically combine artistic skill, hyperbole and satire in order to question authority and draw attention to corruption and other social ills. Political cartoons can usually be found on the editorial page of many newspapers, but are sometimes placed on the regular comic strip page. Most of these cartoonists use visual metaphors and caricatures to address complicated political situations, and thus sum up a current event with a humorous or emotional picture. In modern political cartooning, two styles have begun to emerge. The traditional style uses visual metaphors and symbols like Uncle Sam, the Democratic donkey and the Republican elephant; or the more recent text-heavy style, as seen in Doonesbury, tells a linear story, usually in comic strip format. Regardless of style, editorial cartoons are a way for artists to express their thoughts about current events in a comical manner. A political cartoon commonly draws on two unrelated events and brings them together incongruously for a humorous effect. The humor can reduce people's political anger and so serves a useful purpose. Such a cartoon also reflects real life and politics, where a deal is often done on unrelated proposals beyond public scrutiny.