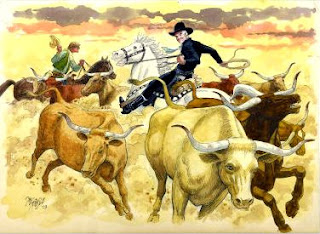 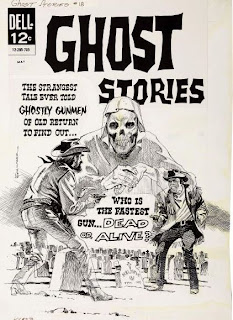 Here is the short N.C.S. bio on one of the longest lasting artist in comics, Frank Springer, whose wild point of view was always welcome as seen in these two examples from Dell and DC's mystery anthology books. -- Born, December 6, 1924 in New York city. Malverne L.I.H.S. in 1948. Bachelor of Arts from Syracuse University in 1952. U.S. Army 1952-1954. Assistant to George Wunder on "Terry" 1955-1960. Freelance ever since. Comic books for Dell, D.C., Marvel, - Sports, Political cartoons for New York Daily News, Newsday and others. Illustrated strips for Playboy, National Lampoon, Inside Sports, Games. Drew "The Adventures of Phoebe Zeit-Geist "(Grove Press) with the late - alas - Michael O'Donoghue. My own strip "The Virtue of Vera Valiant" with Stan Lee - fun while it lasted. Animated some Saturday A.M. mayhem - "Space Ghost" - with a group which expanded - later- into "The Berndt Toast Gang" - now the Long Island chapter of the N.C.S. Currently illustrating "The Adventures of Hedley Kase" for "Sports Illustrated for Kids". Member of National Cartoonist Society since 1965 - category awards, comic books for 1973, 1977, 1982, served on board for off & on, eight years - currently president. Married Barbara Bunting in 1956 and we have five wonderful children. Acted in amateur theater for twenty years, biked across Iowa a few times, ran a marathon, followed the Mets. Toughest- the later. Enjoy opera, vintage pop & jazz. Live on the water in Damariscotta, Maine after sixty five years on Long Island. As you see by this sub-par lettering, I'm a lefty. 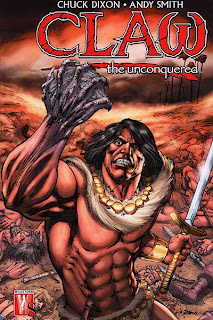 One of my favorite experimental books DC produced in the mid seventies was the sword and sorcery title, Claw the Unconquered. A quarter page black and white spot appeared in those fun add pages (which are few and far between today) in a one hundred page Brave and the Bold issue a few months before it was released. At the end of a fantastic Viking Prince story, there was this half page add of a barbarian, sword in hand, and a blurb that the character would begin in late February. No title of the book was given, so how was a boy to remember what to look for? As a kid though, it peaked my interest, since I always loved the fantasy material, especially from National.

This book was launched with seven other titles that were featured in a full page color advertisement a short time later...First DC gave you the world's greatest SUPER-HEROES, Then DC introduced top quality MYSTERY TALES...NOW DC COMICS presents FANTASY at its best in our all new ADVENTURE comics JUSTICE, INC, TOR, KONG, CLAW, STALKER, WARLORD, BEOWULF, now on sale in there own action packed magazines! The promo had images of the DC stable of heroes, their monsters, and the new characters they were promoting, so I thought they had to be good from the argument presented by my favorite publisher. And most of these books did have an audience, even though a small one, but that could not prevent their quick demise. Only The Warlord survived long enough for Claw to appear in two backup stories with some early art by Tom Yeates. The character was even resurrected to feature in later issues of the 1995 team book, Primal Force. But somebody other than myself must have liked the character with its recent Wildstorm mini-series and cross-over issues with Dynamite Comics of late.

When the first issue appeared in June 1975, the tag line claimed THE WORLD TREMBLES BEFORE THE BLADE OF CLAW. I was excited about this new barbarian feature that looked a lot like Marvel's Conan, but this warrior had a new gimmick, hidden underneath his crimson gauntlet was a horrible dragon's hand. Writer David Micheline provided the mystical scripts for the twelve issue run and the underrated Filipino artist Ernesto Chan provided the pencils for the first seven issues. Keith Giffin, Ricardo Villagran, Bob Layton, Joe Kubert, John Celardo, and Pat Boyette were the artist/inkers for the remaining fantasy tales.

The basic story was our hero searching for his origin and the secret behind this evil hand that often acted on its own accord, since it had a will of its own. In Castle Darkmon, King Occulas had heard of an outlander that would destroy his realm. So with the help of his aged wizard, they sent a legion of creatures to stop the barbarian named Valcan, who was also known as Claw. With a price on his head, Claw had to defend himself against bounty hunters and discover three missing amulets that would lead him to the enchanted silver sword Moonthorn, which was to reveal his unknown past. Along the way Claw is assisted by a devil horned rogue, Ghikyn, the prince of the thousand hills, who saves the barbarian from death on many occasions. The fighting duo eventually discovers and matches together all the talismans pieces that transport them into the Seventh Realm. Here Claw finally confronts King Occulas to find his forgotten past he so desperately seeks.

I have always enjoyed the talented Filipino artists that were working for National in the seventies and eighties, as the artwork on these few pages speak for themselves. Ernie Chan, who also used the last name Chua for a time, once explained that when he arrived from the Philippines a "helpful" immigration officer said that there were too many Chan's in the USA, so the official wrote in Chua on the paperwork. The name was later changed back, but fans often still confuse the "two" artists due to their similar style. Chan after working on Conan and many other Marvel and DC titles put an incredible amount of detail on these pages. He seems to really pull out all the stops when compared to his horror, western, or super-hero work of the same time period. Every panel is action packed, filled with beautiful women, exotic landscapes, fierce creatures, and other features that made him a fan favorite for sword and sorcery tales. The writer and artist weave some nice touches into the story line often using classic mythical figures like the Cyclops and Centaur, as well as developing some unique monsters for Claw to overcome. And often when the fighting really gets going, some villain usually pulls off the scarlet gauntlet only to be shocked at his possessed devil's paw.

The first issue was roughed out in heavy blue pencil, which Chan smoothly inked leaving a moody twilight feel to the pages. The artist must have had some other commitments, because by issue three, Pat Boyette was called in to embellish the next two stories. It was an interesting combination since Boyette usually only penciled and inked all his own material. But with Chan layouts and Boyette finishes, we get the best of both worlds with familiar Claw poses and a new clean inking style. Pat had mentioned before that one of his problems with DC was the editors often marked up his pages with those electric blue markers. Since Charlton and Warren had given him a free hand, he was not too pleased with the scores of requests for small corrections to the art, but as a true professional, he did what was asked of him. But for the original seven fantasy titles that National launched under the same banner, five of the books lasted a mere six issues or less. Claw had a longer run, probably due to its bi-monthly printing and a publishing hiatus of fifteen months between issues nine and ten. Only Mike Grell's Warlord was the real success lasting one hundred thirty-three issues before it ended in 1989. But you can't knock DC for trying! They had a long list of one hit wonder books, but I enjoyed them all the same.
Posted by Dave Karlen at 11:18 AM No comments: