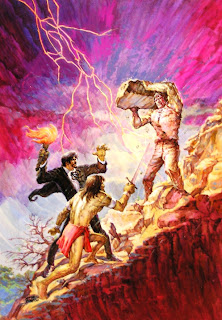 With his first appearance in Mystery Comics Digest #5 in July of 1972, Dr. Spektor was an "occult detective" fighting spirits and demons over its 26 issue run. Written by Donald Glut and  initially drawn by Dan Spiegle for its try-out issue, Jesse Santos was chosen to illustrate the remainder of the series in his distinctive style.  Adam Spektor first started out as a narrator to  Western Publishing's numerous mystery anthology books, but he soon left this "horror host" role and was teamed up with his lovely Sioux secretary, Lakota Rainflower, when Spektor spun off into his own series in May of 1973. Our paranormal fighting hero dealt with mummies such as Ra-Ka-Tep, Baron Tibor the vampire, the Frankenstein monster, werewolves and other chilling creatures, often with the help of his part-time assistants  Elliot Kane and dear cousin, Anne Sara. Graced with beautiful painted covers and slick Jesse Santos interiors, the artist's work got looser over the five years of the series  due to his other commitments on various titles, but still retained all the excitement, mystery, and horror of the feature. Sprinkled throughout the issues was Glut's many cross-over appearances of his other characters such as Tragg and Dagar and even heroes like Dr. Solar. With the recent Dark Horse reprinting of these  delightful tales in a hard cover deluxe format, a new generation of fans can discover these Gold Key gems from the past.

Posted by Dave Karlen at 3:57 PM No comments: 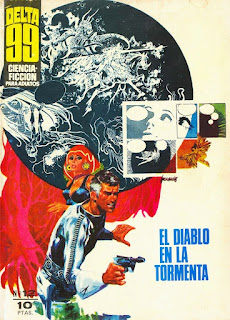 Created by artist Carlos Gimenez and and writer Flores Thies, the strip Delta 99 debuted in Spain in 1968. Sent to Earth from a faraway galaxy on a peace mission from the confederation of planets he is a member of, our hero has no super powers or amazing strength. Armed only with his intellect, he lives with a wealthy and lovely space pirate named Lu, who manages the spoils of his adventures and acts as his main love interest. Gimenez fantastic and romantic sense of design with its strong Art Nouveau style was similar to one of his Spanish peers, Esteban Maroto, as both their work eventually ended up in Jim Warrens black-and-white horror magazines. Once Gimenez left the feature for other projects, the illustration chores were passed to some equally proficient artists such as Usero, Nebot, Mascaro, and Manuel Ferrer. With new scripts by Jose Toutain and Victor Mora, this second stage of the series changed Delta 99 into a suave talking James Bond-like secret agent, with a wry sense of humor. Now loaded with private jokes and double meanings by the staff, our new hero avoided the woman robots of of his earlier exploits to tangle with exotic ballerinas and sexy foreign adventurers. Initially produced in stark black and white, Delta 99 was later reprinted in its entirety in full color to a whole new audience with new texts by novelist Jose Maria Mendiola.

Posted by Dave Karlen at 4:31 PM No comments: 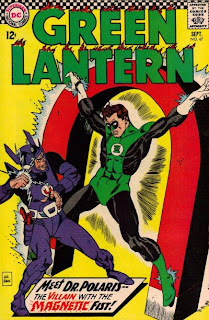 One of the most popular super-heroes of the Golden Age, its easy to see why National revived the Emerald Avenger with a whole new origin in the Silver Age after the success of other revamped characters. Debuting in DC's Showcase #22 in the fall of 1959, our hero Hal Jordan was a daring test pilot trying out a new experiential jet for Ferris Aircraft, when he was mysteriously summoned to the side of a dying alien named Abin Sur. Having accidental crash landed on our planet, Sur's emerald power ring instantly sought out the nearest suitable candidate to replace him in the interstellar police force, the Green Lantern Corps. Now given the magic ring, which is fuelled by willpower, Hal accepted the challenge to become the newest Green Lantern and serve the Guardians of the Universe, fighting evil in all its forms. Being able to project its green energy in any form imaginable, its only limitation is to be recharged every twenty four hours from Hal's power battery, and that its powerless over anything colored yellow. Based out of Coastal City, Hal Jordan quickly became one of the greatest Emerald Avengers for the Corps warning those who worship evil's might, beware my power, Green Lantern's light!

Posted by Dave Karlen at 7:18 PM No comments: 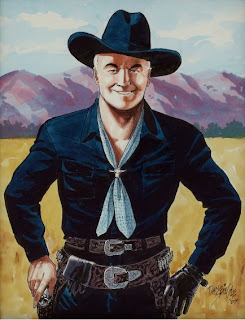 Posted by Dave Karlen at 2:47 PM No comments:

Born in 1874 and growing up on a farm in Indiana, Franklin Booth was fascinated by the images he saw in books and magazines believing the fine lines he saw in the illustrations were done by hand. Little did he know that these pictures were printed on steel or wood engravings used in the reproduction process as the youth painstakingly copies them, line for line, with pen and ink. Always wanting to be an artist, Franklin practiced endlessly until he developed his own unique style where he could achieve a full range of values by using just black ink on white paper. Studying at the Quaker Academy in Westfield, Indiana, he was soon hired as a writer and artist for the Indianapolis News. Later he studied at the Art Institute of Chicago and after four years of intensive study, moved on to New York where he immediately found work with Munsey's Publications. After travelling Spain in 1906, Booth returned  to Manhattan to work for all the major magazines who sought after his superior skills with pen and ink. The artist's grand style could be seen in every assignment, whether is was an advertisement or editorial project as he often worked many days and nights until it was finally completed. Enjoying travel between his assignments, Booth eventually settled down to teach in the mid-1930s  at the Phoenix Art Institute trying to inspire his many students to produce pieces with imagination and beauty.