I thought I'd end the year with this captivating and detailed pirate tale by the talented Spanish artist, Esteban Maroto. It features ten dynamic pages of swashbuckling action. The complete story is a wonderful example of Maroto's moody work. It includes a fantastic full page title splash and a "creepy" sexy vampire finale page. Maroto was no stranger to fantasy and horror, having worked heavily in the genres within Creepy, Eerie, Savage Tales as well as other Warren and Marvel magazine format titles. But don't take my word for it enjoy this tale entitled "Buried Pleasure" published in Creepy #49 in 1972... Posted by Dave Karlen at 7:41 PM No comments: 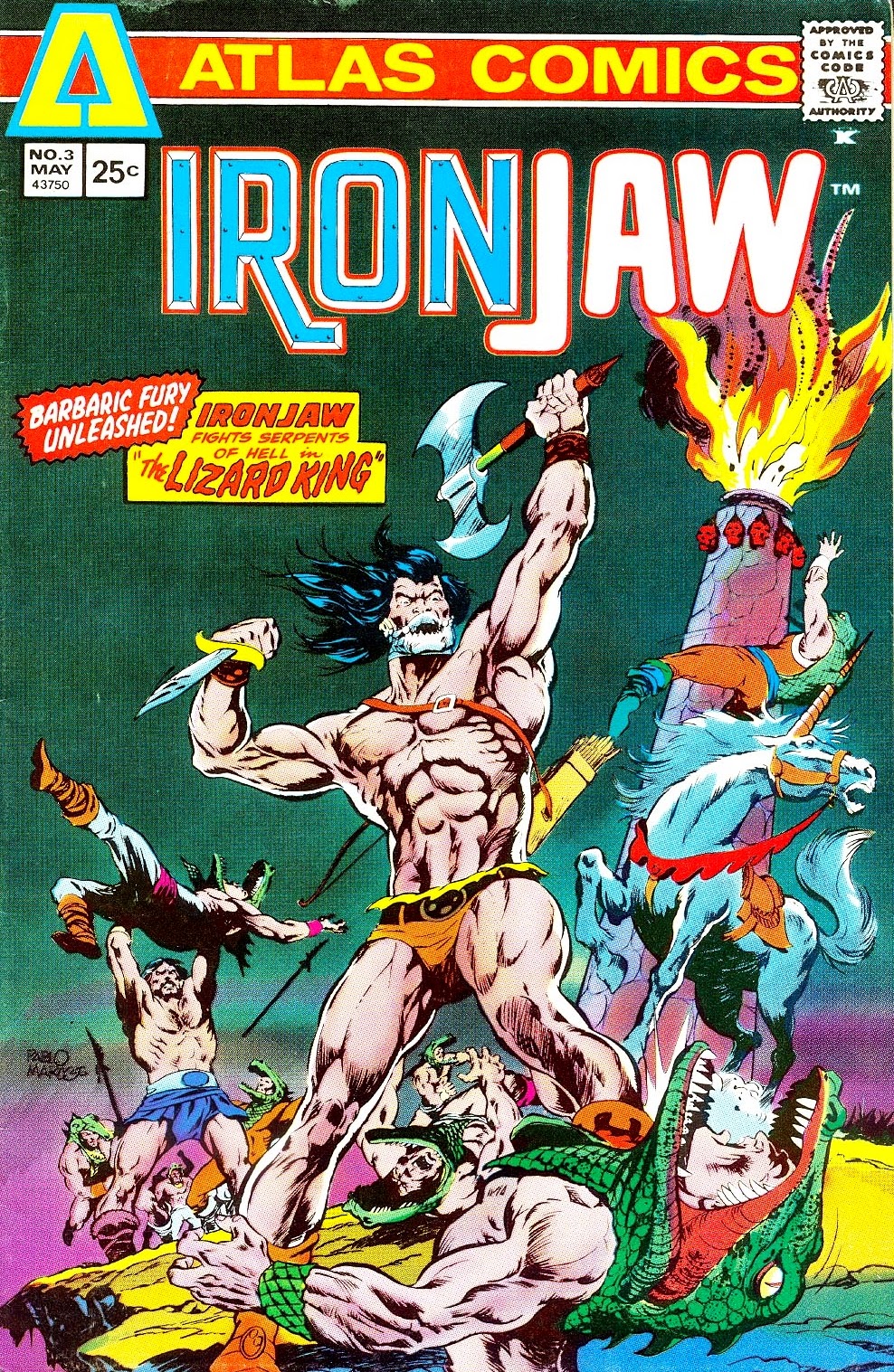 The first of the Atlas sword-slinging characters, Ironjaw #1 debuted in January of 1975 with a dynamic cover scene by artist Neal Adams. Written by comic veteran Michale Fleshier and drawn by Mike Sekowsky and Jack Abel, our savage hero roams the world in earth's distant, post-apocalyptic future. The story starts out as Ironjaw is hired by rebels to help overthrow a tyrannical king, but the warrior soon discovers his true heritage. As an infant, his mother's lover killed Ironjaw's father, the true king, and ascended to the throne himself. With the complicity of the queen, the new king ordered the infant killed, since he would inherit the throne and depose the usurper upon reaching adulthood. However, a soft-hearted stable hand abandoned the boy on a snowy mountainside, rather than kill him. The baby is then discovered and raised by the bandit Tar-Lok and his tribe. Ironjaw eventually kills the tyrant-king and claims his throne with the help of his sister who noticed their identical birthmark that revealed his true identity. But the new crowned majesty slips away in the night since kingly duties are of no interest to a barbarian. The only character in the Atlas line up to have four issues and one appearance in the anthology title, The Barbarians, Ironjaw was one of the most fleshed out characters as we discover his origin in Ironjaw #4 how his jaw was removed by a jealous group of thieves and replaced with the hideous jaw made of iron. Pablo Marcos' bold style was a good choice to continue the artistic chores as new writer Gary Friedrich took the barbarian in a different direction before the company suddenly folded.

This may be the wildest interview ever with the classic EC Comic artist Al Williamson, It's his "Let's Get Cozy With Larry Wargo" presentation. Unfortunately this is just some excerpts from the longer version on YouTube you have to see, and I understand why Al wore the dark glasses for this one, but  he does explain his long career and love for the Western, Science Fiction, and fantasy genres....