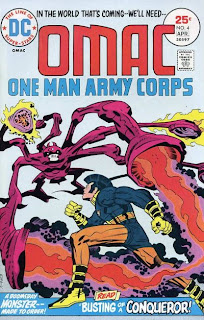 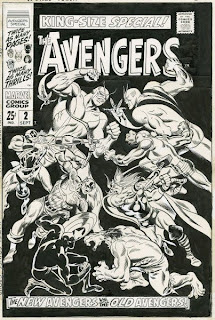 Posted by Dave Karlen at 1:25 PM No comments: 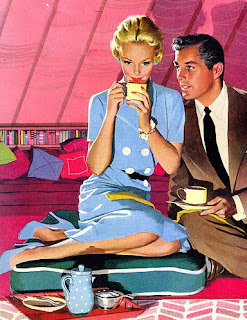 John Cullen Murphy...In His Own Words 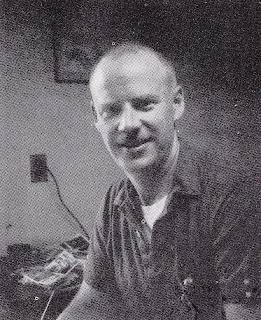 I was born in New York City in 1919, and reared in Chicago, where I attended the Chicago Art Institute. In 1934 I was a model for Norman Rockwell, the noted illustrator, for several of his paintings. He also gave me great encouragement in my art work. I attended the Phoenix Art Institute, Grand Central Art School, and the Art Student's League. I studied with Franklin Booth, George Bridgeman, Sidney Dickinson, and Charles Chapman. I painted cover for Columbia and Liberty magazines in 1939 and 11940.While I was in the Army, I traveled all over the country.I also saw service in Australia, New Guinea, The Philippines, Okinawa and Japan. I painted portraits of many outstanding generals: MacArthur, Krueger, Kenny, Eichelberger and others.Also did the on-the-spot war paintings for the Chicago Tribune.

I came out of the Army as a Major, and began doing paintings and illustrations for Metro-Goldwyn-Mayer, Look Magazine, Colliers and many more. Most of these illustrations were in the travel or sports vein.Elliott Caplin, brother of Al Capp, contacted me with an idea for a new strip in 1949. I agreed to illustrate it, he to write it...it was to be called Big Ben Bolt, and it was sold immediately to King Features Syndicate. It's been going ever since. Elliott Caplin lives near me, and he sends me scripts every week. They are different stories for the daily and Sunday strips, and they require a great deal of research. In my employ is George Raymond, younger brother of the late Alex Raymond.Raymond does research and lettering, and roughs out picture ideas. I do all the final work except the lettering. I frequently use real people... neighbors, friends etc. as models. Ben Bolt in a prize-fighter and I have an extensive background in that sport. I have a studio separate but adjacent to my one hundred year old Victorian home. When not drawing, I am painting.

Posted by Dave Karlen at 1:13 PM No comments: 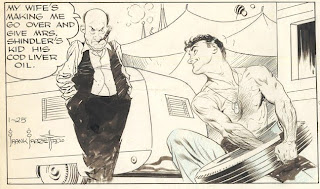