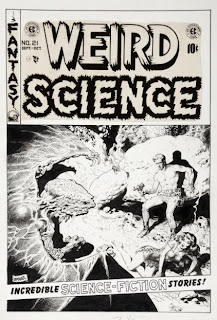 Posted by Dave Karlen at 5:16 PM No comments: 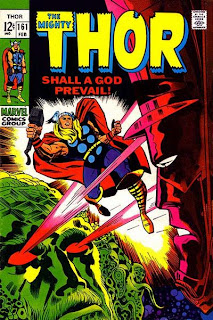 A good friend of mine has a large collection of the earliest and best known of comic fanzine's, the Rocket's Blast Comic Collector. One of the first “adzines” from the late 1960s it was filled with ads for comics, movies, old time radio, original art, convention reports, and other various fan publications. It also had great articles, interviews, comic reprints, and artwork from pros like Frank Brunner, Mike Ploog, Steve Ditko, Neal Adams, Tom Sutton, Berni Wrightson. It also showcased new talent that later would become professionals, including Don Newton, Mike Zeck, Kerry Gammill, Bret Blevins, and others. When the magazine ended in the late 1970s the Comics Buyer’s Guide picked up a lot of these features, but the art prices from RBCC being earlier are even lower!

For example, here are prices from the 1971 RBCC #74 by dealer Gary Dolgoff, who is still going strong, selling art and comics today. It seemed the “magic price” in this ad was fifteen dollars for spectacular pieces -- like Steve Ditko Thunder Agent pages, or even Dr. Strange art from Strange Tales #125. Lots of Tower artwork had apparently just been released from the publisher, since there was a great deal on the market from different sellers at super cheep prices, since almost all the Wally Wood pages of Noman and Dynamo were also running $15 @ from Thunder Agents #3-9. Gil Kane’s Undersea Agent #5 examples were a mere $10 a piece or you could have any of DC's Green Lantern #55 or Atom #36 for the same low price. George Tuska or Mike Sekowsky Thunder Agents pages from issue #7 were selling on average for $7.50 a panel page!

How about some gritty “Big 5” action by artist Joe Kubert. His war pages were $8 and a Sgt. Rock cover ran only $15, or pieces from the early try-out Hawkman books from Brave and the Bold #44 for fifteen bucks! But some of the best deals I saw would have to be a Jack “King” Kirby cover for the Mighty Thor #161 for thirty dollars, and wonderful Human Torch pages from Strange Tales for 20.00 for a splash or that magic fifteen dollar price for various assorted pages. A John Severin Sgt. Fury cover for issue 34 would set you back a mere $25, same price for a Dan Atkins X-Men #34 cover. But the great examples from X-Men #18 or #19 by Werner Roth were only $7.50 a page! Take your pick for the twenty offered.

Dick Dillin 's Justice League of America pieces from issue #68 were only fifty cents more than the Werner Roth. While some higher priced Dell work from Russ Manning were $17.00 for Magnus Robot Fighter artwork, but more affordable pages from his Ben-Hur one-shot were $12. Dynamic examples from the dynamite team of Carmine Infantino and Murphy Anderson on their Mystery in Space run had pages from #79 or #81 with Adam Strange at $15 or $20 for a splash, and even Anderson’s Hourman pages from Showcase #56 were twelve bucks. The absoluute cheapest deal was a cover to an undisclosed issue of Men of War by Irv Novick for $7.50, I guess it didn't matter which one it was at that price! The very highest priced page in the advertisement was from X-Men #58, pg. 10 to be exact by Neal Adams for $25. Let the good times roll! 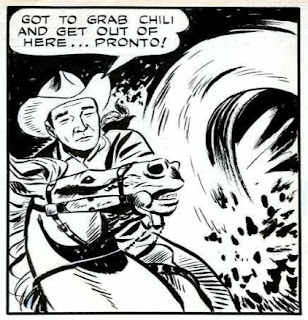 Posted by Dave Karlen at 2:25 PM No comments:

Jerry Grandenetti was one of my favorite artist to work for DC Comics drawing Western, sci-fi , mystery-suspense, crime, superhero, and especially his war features for the various DC "Big 5"anthology books. Coupled with Robert Kanigher they produced some memorable characters and storylines, using some of Jerry's experiences in the Navy during WWII for reference. So I thought I'd show off a few of his stories, done in his later "looser" art style from the seventies, and start off with submarine warfare thriller called...