Adventure Comics "The Wrath of ... the Spectre" 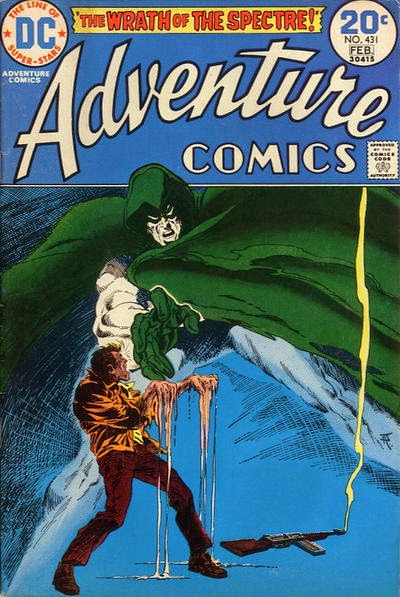 From his first appearance in the Golden Age in More Fun Comics #51 (Jan. 1940) the Spectre was has been one of DC comics most long lasting characters. Created by Jerry Siegel and Bernard Baily, the series began when hard-boiled cop Jim Corrigan, on his way with his fiancée to his engagement party, was murdered by being stuffed into a barrel filled with cement and then drowned. His spirit was refused entry into the afterlife however, instead being sent back to Earth by an entity referred to only as "The Voice" to eliminate evil. This started his long career wreaking vengeance on criminals. But my first encounter was in the Bronze Age 1970s revival, as DC brought the Spectre back in  Adventure Comics #431. Beginning with the 12 page "The Wrath of ... the Spectre" in issue #431 (Feb. 1974). Writer  Michael Fleisher, and artist Jim Aparo produced ten stories through issue #440 (July 1975) that became controversial for what was considered gruesome, though bloodless, violence. The story goes that once editor Joe Orlando was mugged, he quickly decided the world needed a really relentless super hero. The Spectre came back with a vengeance and quickly became a cause of controversy. Orlando plotted the stories with Fleisher, as they emphasized the gruesome fates of criminals who ran afoul with the character. With The Comics Code recently liberalized, the series pushed its restrictions to the limit, often turning evildoers into inanimate objects and then thoroughly demolishing them. Jim Aparo's slick art showed criminals being transformed into everything from broken glass to melting candles, but Fleisher was quick to point out that many of his most bizarre plot devices were lifted from stories published decades earlier. In the series' letter column, some young fans indicated uneasiness with this new depiction. In issue #435, Fleisher even introduced a character that shared their concerns, a reporter named Earl Crawford. The series was eventually canceled with scripts written but not yet drawn, but fortunately these remaining chapters were penciled by Aparo and published in the final issue of Wrath of the Spectre, a four-issue miniseries in 1988. But enjoy the story that started it all, the first and probably best of these tales featured below...