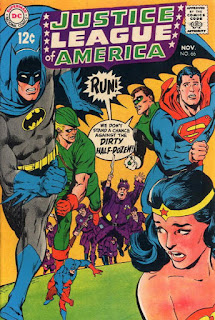 Here is another interesting variant of the published cover for Justice League of America #66 for November of 1968. Though not signed it appears to be by laid out by Carmine Infantino, tightened up by Dick Dillin, and inked by Joe Giella. There were a handful of artists DC favored to grace their covers as shown on this Neal Adams' version of the "Dirty Half-Dozen" chosen for print. Compared to the Infantino unpublished piece below, it couldn't have been more different with a triumphant JLA scaring their foes or Adams' super heroes running in terror! Perhaps editor Julius Schwartz just enjoyed the Neal's take on the scene over Carmine's interpretation. Born in 1925, Carmine Infantino attended both the School of Industrial Arts and the Art Students League in New York City, and broke into comic books as the illustrator of Timely's Jack Frost feature in 1942. In 1946, he began working at National Comics (DC), illustrating the Golden Age superheroes Flash, Green Lantern, Black Canary, as well as the Western, Johnny Thunder. In the fifties Infantino's drawings evolved into a streamlined, design-oriented style, influenced by artists Edd Cartier and Lou Fine. Perhaps Carmine's most celebrated work was his Silver Age re-launch of The Flash, which he drew for eleven years from 1956 to 1967. During this peak period of his career, the artist also drew various features including, Adam Strange, Batman, and the origin of Deadman. From the late sixties to the late seventies, Infantino served as the Editorial Director and then publisher of DC Comics. He oversaw many new innovative titles like Bat Lash, Captain Marvel, The Creeper, Hawk and Dove, The Shadow, Green Lantern/Green Arrow, Jack Kirby's Fourth World titles, and Joe Kubert's Tarzan comic books. Under his reign many artists now became editors at DC for the first time. When Infantino was replaced by an executive at DC, he returned to the art board and drew features for Warren Publishing, Marvel, and DC Comics before his retirement.
﻿

Posted by Dave Karlen at 6:17 PM No comments: 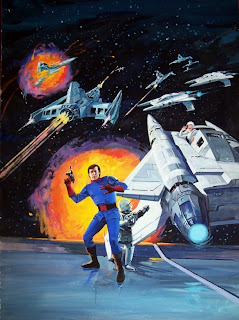 Posted by Dave Karlen at 8:45 AM No comments:

Make Mine Marvel: The Living Mummy 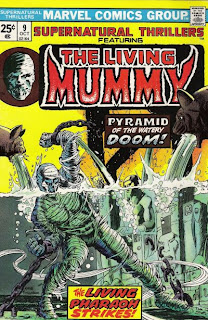 With his first appearance in Supernatural Thrillers #5 from August of 1973, Marvel Comics added to its stable of horror characters N'Kantu, The Living Mummy, created by writer Steve Gerber and artist Rich Buckler. Starting out as the monster who haunts Cairo, Egypt, after a few issues the character was transported to the streets of New York to continue his reign of terror with writer Tony Isabella and artist Val Mayerik. A son of a tribal chief from Africa from three thousand years ago, N'Kantu and his people were captured by Egyptian slave traders who forced their captives to build monuments to the current Pharaoh, Arm-Set. As N'Kantu and his followers eventually revolted and overthrew their captors, N'Kantu slays Arm-Set, but not before the African prince is sprayed with a mysterious paralyzing liquid by the evil priest Nephrus. Transformed into  a "living mummy", our hero now revives three thousand years later to start his rampage of Nephrus surviving descendants. With a super strong rock hard body, the Mummy is vulnerable to fire and electricity as he fights mystical villains across time and space in the Marvel Universe for this short-lived series.
﻿

Posted by Dave Karlen at 9:04 PM No comments: 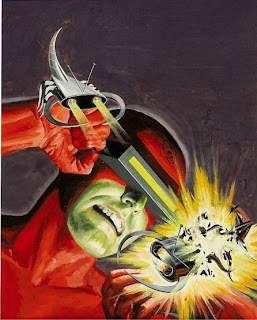 Posted by Dave Karlen at 1:17 PM No comments: 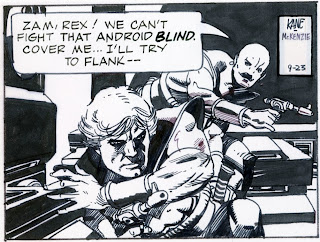 Posted by Dave Karlen at 8:39 AM No comments: