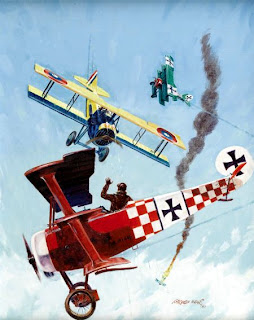 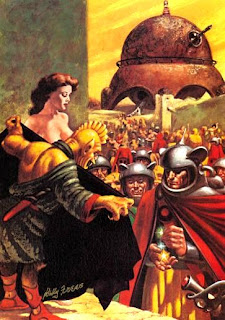 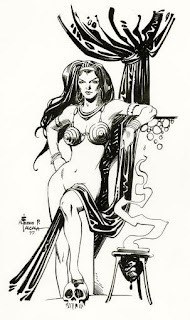 Those fantastic Filipino artists never cease to amaze me with their phenomenal detailed work they did for DC, Marvel and Warren in the seventies and eighties. Not to mention all the pages produced in the Philippines by these comic masters way before they ever hit the American shores. I’m impressed with any Filipino work, but especially the artistry of Tony DeZuniga, Rudy Florese, Rafael Kayannan, Jess Jodloman, Rudy Nebres, Alex Nino, Jesse Santos, Alfredo Alcala, and Nestor Infante. Out of these creators, I've only been able to meet DeZuniga a couple of months ago at a local show. He was quite a reserved gentleman with an enormous talent, (his pencil work has to be seen in the originals to be believed) and has a delightfully charming wife. It was a real treat to finally meet one of my most prized comic creators who is still going strong in the business today.

Recently I ran across some Arthur Geroche factoid pages that were planned for DC’s Bible book(s), that were never published up for auction. Unfinished only at the logo, they were beautiful vivid scenes that displayed different trades, carpentry, weaving, and other professions in biblical times. I was lucky enough to purchase some Geroche’s King Arthur factoid pages about armor, warfare, and castle siege engines back in 2001 in San Diego. At that time, a friend saw, but did not purchase the Bible pages, since they were bought up before he could grab them! So finally after seven long years of waiting, here was my chance to own these beauties I’ve heard about, but never seen until now. Unfortunately, one bidder wanted these precious gems even more than I did, as I was greatly outbid at the last second. But at least I have one example of his lush delicate work. Not much more was produced by Geroche, being late to arrive to DC when the Filipino’s contributions were just about ending. The artist did only six brilliant stories for the mystery/horror anthology books that I know of, and these few unpublished factoid pieces mentioned, before drifting off with his peers to find work elsewhere in the industry.

Nestor Redondo, on the other hand was one of the earliest illustrators to sign with National in the seventies (after Tony DeZuniga) and helped bring many of his fellow countrymen to work for DC in his eleven years with the company. Best know for his beautiful run on Swamp Thing and all-time fan favorite, Rima, the Jungle Girl, Nestor ended up doing around fifty horror stories for DC. But surely one of his greatest achievements was his spectacular work on the oversized Limited Collector’s Edition of The Bible. Redondo was the perfect choice to illustrate the special project (over Joe Kubert layouts), since he was a deeply religious man who had already done a biblical adaptation in his home country in one of his comic creations. Nestor also served as art director for Pendulum Press’ Classic series of paperbacks which had many of his friends produce some real stunning little stories. Too bad you lose so much detail when printed in an average size paperback book. When the work at DC was dying out in early eighties, Redondo did a few assorted covers for Marvel and some other publishers before going into animation like many of his peers.

Another one of my beloved Filipino artists is the talented E.R. Cruz, who drew close to an astounding two hundred stories for National’s war, Western, and horror books. But the artists moody noir look was best displayed I believe in the marvelous short-lived issues of DC’s Sherlock Holmes and pulp icon, The Shadow. His extremely detailed inking style with a strange oriental feel was well displayed in those titles and the Pendulum Press issues he illustrated for Redondo, not to mention his work for Warren, Marvel, and Dark Horse. Finally, I wanted to show a page from Rudy Florese who was a solid illustrator with a beautiful graceful line as shown in this wonderful Korak page. He drew many Edgar Rice Burrughs features for DC , mainly over Joe Kubert layouts, and also a handful of chilling horror stories.