Jerry Grandenetti's "The Carrier of the Serpent"

Jerry Grandenetti was one of my favorite artists who worked for Warren Publications back in the seventies. His moody expressionistic drawings were perfectly matched for those spooky tales he created by himself or with others for the black and white magazines, Eerie, Creepy, and Vampirella. So just in time for Halloween I thought I would show this weird little tale. The one story that stood out in my mind from the rest of the pack might be his collaboration with writer T. Casey Brennen in their story "The Carrier of the Serpent" published in Eerie  #38 for February of 1972... 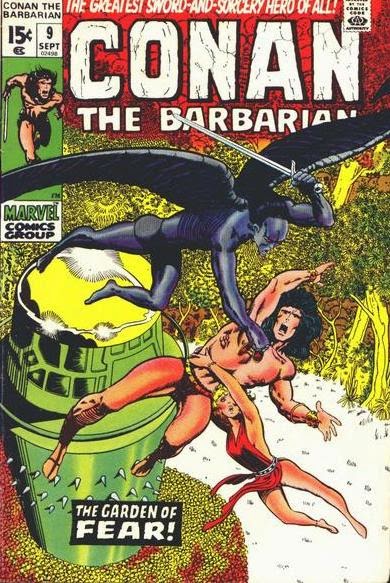 One of Marvels most popular characters that started the "barbarian" invasion in comic anti-heroes, we were lucky to have the talented Barry Smith on the title to provide the lush illustrations. But don't take my word for it, just take a look at this unpublished cover for Marvel's Conan the Barbarian #9 from 1971. Robert E. Howard's most famous creation savagely fights as he falls in this action-packed cover from "The House of Ideas" most renowned Bronze Age title. With wonderful backgrounds as supremely detailed as the main figures themselves, you can see why Smith's art, especially his covers, are so prized by original art collectors. Thought somewhat different than the actual printed version as shown here, I imagine this was an earlier version of the piece, most likely changed at the request of the editor. Perhaps to make Conan a little larger and more centered in the image. In many ways, however, one could argue this version is clearly superior to the version that was eventually published. Incidentally this cover sold at auction back in 2003 for the grand sum of $7,590, so who knows what a cover of this caliber would cost  today eleven years later.

Posted by Dave Karlen at 9:32 AM No comments:

Here is a rare documentary featuring interviews, rare clips and insight into the origins of baby boomers favorite television cartoon, Jonny Quest, featuring it's creators and other artists it inspired over the years. This amazing documentary highlighting Doug Wildey's work originally appeared on the excellent JONNY QUEST DVD box set.

I hope you enjoy this little film starring three of the top names in comic art from 1972 in a rare Manhattan meeting between Burne Hogarth, Philippe Druillet, and "Big" John Buscema! While Druillet starts us out with some of his fantastic creatures, Tarzan artist Hogarth creates a drawing of the jungle lord in pastels, while Buscema renders on of his best characters, The Silver Surfer.