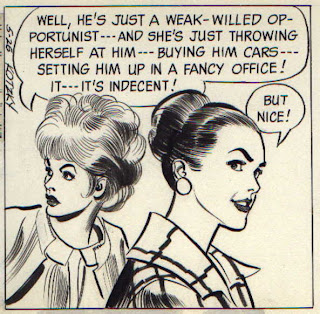 Alex Kotzky is best known for his artistic work on the long running Apartment 3-G series for Publishers Hall Syndicate. But before he created the look of one of the nations most enduring soap-opera comic strips, he did a variety of other artistic endeavors. Born September 11, 1923, in New York City he attended public school and later the Art Students League with the intention of becoming an illustrator. As an art student in the early forties, Kotzky did his first penciling assignments for the newly formed DC Comics. He also worked with legendary cartoonist Will Eisner producing backgrounds on The Spirit, before his three year commitment to serve in World War II. Upon his return from service in 1946, he drew various adventure heroes for Quality's Comics like Plastic Man, Doll Man, and Blackhawk to help better develop his craft.

In early 1951, Kotzky started out doing storyboards for the Johnstone and Cushing advertisement agency, while also working on the Ford Motor Company and Dodge auto accounts. In the mid-fifties he began freelancing, creating medical illustrations for magazines and ghosting newspaper strips like Juliet Jones, Big Ben Bolt, and Steve Canyon. He also drew for Phillip Morris the very popular Duke Handy Sunday cigarette ads at this time.

When Harold Anderson, head of the Publishers Newspaper Syndicate, heard of a new strip idea from psychiatrist and writer Nick Dallis, he quickly contacted Alex about drawing the upcoming feature. The newspaper strip Apartment 3-G developed from their well matched collaboration and debuted with a daily and Sunday format on May 8, 1961. The story detailed the adventures of three beautiful career women who shared an high-rise apartment in New York City. Lu Ann Powers was the spunky school teacher; Tommie Thompson a brainy registered nurse; and Margo Magee, a knock-out executive secretary. As well as the varied look of the ladies, usually the three have different attitudes to match there respective hair colors! To round off the 3-G trio we have their neighbor, Professor Pappagoras, a local Greek college professor who helps the girls as father figure, advisor, friend, and some time protector. This remarkably fresh strip for the day was one of the first realistic portrayals of working women in the comic pages. The intelligent storylines concentrated on the characters and their different personalities, making the strip more realistic and enjoyable to read than many of their contemporary story strips. Better writing, coupled with Kotzky's slick illustrative style and delightful portrayal of the women, made the feature a fan favorite world wide.

With the death of Nick Dallis in 1991, Kotzky began the chores of writing the strip as well. He continued with many imaginative plots and continued the spectacular graphics until his death in 1996 from kidney disease. The strip continued for a few years in a similar art style by Kotzky's son, Brian, and with a new female writer, Lisa Trusiani. As Brian Kotzky later wanted to make a career change from his artistic endeavors, veteran comic artist Frank Bolle was called to draw Apartment 3-G until its demise. Though a shadow of what it was, this classic strip still endured and was distributed to more than one hundred newspapers across the country at the time of cancellation.!

I've been fortunate to have had a nice variety of Apartments 3-Gs from its thirty-five year run with loads of beautiful girls, handsome gentlemen, buildings, autos, and those great New York City scenes. I bought a nice selection from the late sixties and the "looser penciled" seventies period which were always some of my personal favorites. I believe the strip just started to look more like fashion illustration and slick advertising artwork by the end of his run. I hope you enjoy Kotzky's beautiful detail in the panels provided!

wonderful artist, thanks for sharing.
Btw I've just discovered this blog thanks for Lei Peng's post, I'll come back often, it's a great place!

Roberto, thanks for the kind words, but my blog pales in comparison to Lei Peng's fantastic blog.

This is such beautiful work from Alex Kotsky. Thanks for sharing the scans. Are there any reprints available of the best years of Apartment 3G?

Josh, I don't know of any reprints of the strip except the Menominee Falls Gazette, but they sure need to do some!

Apartment 3G, Rex Morgan M.D., Mary Worth among other really enjoyable strips appeared in the Los Angeles Times in my day. The daily strips I would read whenever the daily paper was available , fortunately that wasn't a problem on Sundays. Apartment 3G was always a favorite. Bought some 1968-69 L. A. Times comic sections at a swapmeet, couldnt pass them up. Comic strips were my first embrace and they remain as treasured today. Quick story: One day while playing with my cousins in our grandparents garage I knocked over a box and inside was a 1949 comic strip section from either a local or distant city newspaper and the strip that immediately caught my attention was from the Alley Oop adventure Trip to the Moon. I had never read Alley Oop and a few of the others on that page, I was familiar with the song but discovering that particular strip heightened my appreciation of comic strips even more. Can't explain why but it did.