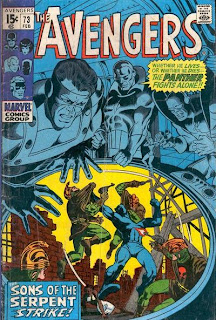 I recently ran across a stack of old Comic Buyers Guide issues that were jam-packed with original comic art ads from the early seventies, and just about had a heart attack! It was good to see some dealers from that time period are still in business today, but a majority of them have gone by the wayside. Oh, but those prices on these pieces will really make your head spin. Like the cover featured here to Avengers #73 by John Buscema was on sale for a mere $45! You might want to sit down as a give a rundown from a few ads from Richard Pryor's Gallery Of Fine Comic Art. As well as that prime piece, Richard had...Covers by Ernie Chan for Detective #461---$75, or Batman #268 for $45, or how about Justice League of America #124 staring the Justice Society for $50, not to mention Freedom Fighters #1 for $50. Would anyone like a Dick Giordano cover for Tomb of Dracula #25 for $75? Or how about a John Romita cover for Captain America #117 (sorry no logo) where Cap meets the Falcon for the grand total of $50! There's also the Ross Andru cover art to some DC war book titled, All-American Men of War, with Indian Ace Johnny Could in aerial action for...$30. Gulp! Good thing those British Planet of the Apes or Spider-Man cover were going for $15, more affordable. Whew.

How about paying some "crazy" money for comic panel pages. Lets start out with a few Craig Russell Killraven pages from Amazing Adventures #27 for $45---nice but I might spring for that Buscema cover first. Paul Gulacy had some fantastic action-packed pages from Master of Kung Fu at $35 each, or you may want to invest in a Wally Wood gem of a splash page from my favorite toy title, Captain Action #1 page 24 for $45. What would you pay today for a nice Barry Smith Conan the Barbarian page from issue #9, well they were running $150 each - WOW - finally some high dollar stuff, or is it? Ever want any Reed Crandell pages from that beautiful Gold Key favorite, Flash Gordon #1 for $35-$40 each? Maybe your money was better spent on Ross Andru's Amazing Spider-Man pages from #129 where Spidey fight this new villain named Punisher for, get this,...$30 each.

Too much to spend you say, you're on a budget and need to save for college. Richard had prices for us poor boys too, so I could spring for the John Buscema Conan #47 pages for $25 each. Ditto for Ditko's Hawk And Dove pages from issue #2, or maybe you like that weird Creeper character @$25. Can he dare go lower than that! Well, to scrape the bottom of the barrel, I guess you would have to pick up some Val Mayerick pages from Marvel's The Living Mummy or Monster of Frankenstein horror titles for $15 a piece. Or there is this guy called Russ Heath whose pages from Our Army at War with Sgt. Rock and Easy Company were selling for $15 a shot, and you can even have pages from his 1950s Battle Comics for that same price! Too bad I didn't start collecting original comic art for another fifteen years.