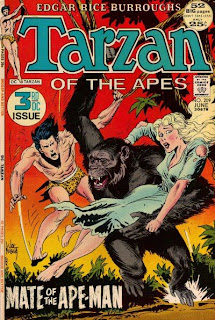 Here is the very short bio from the National Cartoonist Society Archive for one of my favorite DC artists that started in the Golden Age of comics and is still going strong today, Joe Kubert. I had the pleasure of meeting the artist some years ago and spending some time with him, and it was a fascinating afternoon talking with one of the major forces in comic art today about his many years in the comics industry... Born in 1926...immediately put up for adoption because of "ape man" lookalike. Lucked out and became a cartoonist. Bin doin' that for many many moons. Work in comic book field includes stuff like: Sgt. Rock, Hawkman, Enemy Ace, Tarzan, Tor, and a whole lot more. Bin doin' covers for pat buncha years...and developing new projects for comic book/album and illustrate novel format. Owner and instigator of the Joe Kubert School of Cartoon Art, inc...soon to be celebrating its Bar Mitzvah --- thirteen years in operation. Still feel lucky...doin' what I do...drawing crazy pictures -- and getting paid for it.

Posted by Dave Karlen at 9:22 AM No comments: 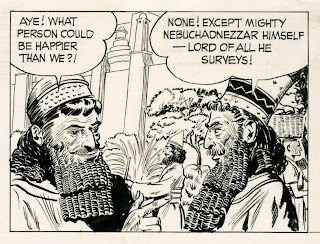 In 1954, John Lehti was still looking for an original strip idea to pitch to the newspaper, syndicates when he came up with the notion of a Bible-inspired feature called Tales from the Great Book which sold accordingly as a Sunday only strip to Publisher Syndicate. Lehti, over the next eighteen years, presented some entertaining Biblical epics that felt more like the Hollywood motion pictures of the time, respectful yet not preachy in tone, based mostly on the dramatic spectacles of the Old Testament. Lehti could tell the exciting action-packed story like David and Goliath or a "quiet" tale from the Book of Ester with equal flair, drawn in his pleasant detailed style. Often starting or ending the Sunday page with a Bible verse to better summarize his storyline, the dialogue was a interesting combination of modern American expressions and King Charles English. But, I fondly remember reading this feature in my local Dallas paper as a child, especially enjoying the large historic battle scenes, or saintly acts of courage the heroes encounters from their often overwhelming Biblical odds.

Posted by Dave Karlen at 1:02 PM No comments: 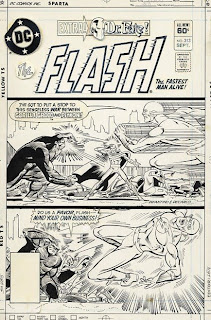 Carmine Infantino may not have started DC's fascination with gorilla covers, but he sure enjoyed drawing them over the years. Many believe Strange Adventures #8 started it off with the image of a gorilla trying to get out of a zoo by writing a message on a chalk board, drawn by Win Mortimer. But I think the executives at DC just found out that issues with apes on the covers had an increase in sales, so they did a lot of them in the years to come. Numerous talented artists drew ape covers for all the various titles, but DC's sci-fi anthology books were always my favorites. Seeing apes on the cover of a Tarzan comic was not really out of the ordinary, but when they fly spaceships around Saturn's rings, they stand out. Strange Adventures was always the best comic to find covers with intelligent apes working on scientific experiments, practicing medicine, on talk shows, and even cross-examining a witness in the courtroom! But Carmine did appear to do a high number of these covers, or a least a story in them, including his popular Flash Gorilla Grodd covers. Featured here are some of the numerous DC ape covers done by Carmine Infantino or issues with one of his gorilla features inside.

Posted by Dave Karlen at 9:55 AM No comments: