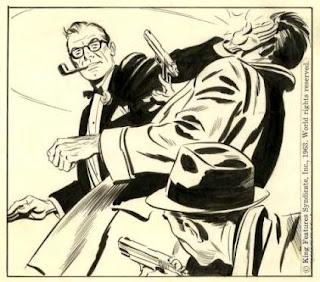 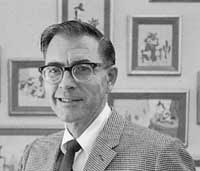 One of the earliest strips Doug Wildey worked on was Leslie Charteris famous thrill seeker, The Saint. I've heard that one day the creator saw the initials of his character, Simon Templar, and imagined the nickname "Saint" would be the perfect title for his creation. His adventures have been documented in books, films, radio, comics, and television since the early thirties. Charteris even wrote his newspaper strip from 1948 to 1961, which was syndicated worldwide by the New York Herald Tribune. When Wildey was called to helped finish out the series, he took over the artistic chores from Bob Lubbers and continued in Bob's style for a few months before developing his own unique look for the character. Even though Doug relied heavily on photo references, his Saint's new look was to be of great importance in the near future. Wildey's dapper man of the world, now with a classic goatee, quickly developed into the prototype for Dr. Benton Quest of Hanna-Barbara's Jonny Quest fame. Later, other major Quest characters were developed when Wildey pitched his own Sunday strip about an globe trotting race car driver, Stretch Bannon, that unfortunately never caught on with any syndicates. But don't take my word for it, this is what Doug had to say.

"As everybody in the illustrative cartoon business has done, I once tried an automobile comic strip. Because this whole country runs on the automobile economy, right? I know at least five other cartoonists -- I can't name them all any more, but I think they include Leonard Starr, Mel Keifer, Frank Frazetta -- who all tried something with an automotive background. In my case, my guy was sort of an automobile designer. He raced cars. He had this glamorous European background, and raced on American tracks. I called him Stretch Bannon. I liked the name Stretch Bannon. Then, later on, I tried another strip about a writer-artist team that traveled the world getting into adventures. The name was Race Dunhill. So I put the Race and the Bannon together and that's where Race Bannon came from. I originally named the show (Jonny Quest) The Saga of Chip Balloo. It was a working title, I wasn't really serious, but that was it for the beginning."

But the interesting part is when you look at those few Sundays try-outs, if Stretch Bannon was an early prototype of Race Bannon, his young sidekick mechanic called "Chip" was a dead ringer for Jonny Quest, though older than the boy the series finally settled on. Apparently, the speed required of producing both a daily and Sunday strip, coupled with Wildey's comic book work, proved too much for him. As Dick Ayers wrote," Doug had me ink some of his Saint daily strips back in "60 or "61. We'd meet in a local parking lot to trade penciled strips and inked strips." You can see in some of the work the heavy line of Ayers creep in over Doug's fine line pencils which was always a stark contrast to Doug's inks, but as any syndicate man will tell you those deadlines can be a killer and you have to do what you can to keep the feature moving. As Wildey said to Russ Heath when he started to draw the short lived Lone Ranger feature,"Any illustrative strip is going to fall behind in deadlines and you will call your artist friends (to help) and stay up working all night." Well thank goodness Doug worked on all these strips from the past or we might never had all the wonderful Quest characters today.

Posted by Dave Karlen at 4:47 PM No comments: